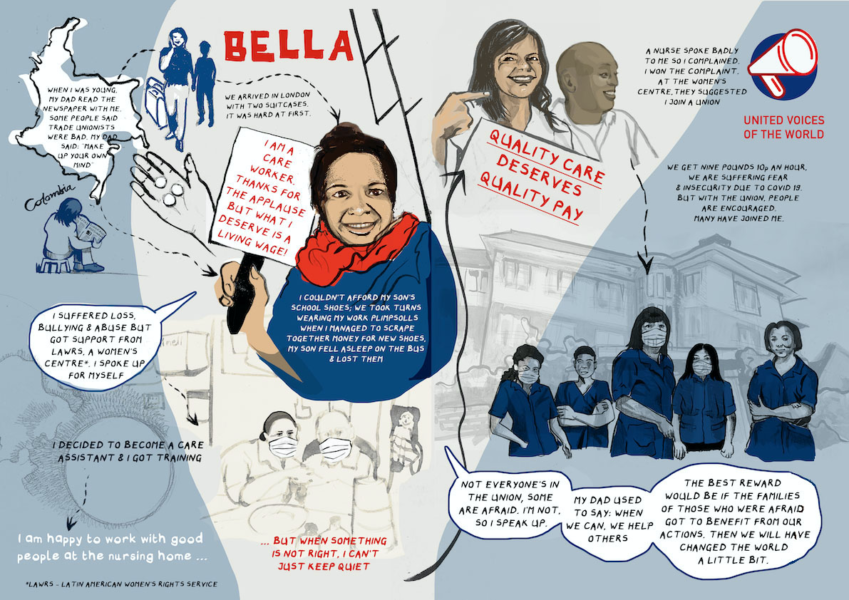 “I am proud that I have not remained silent and have raised my voice for dignity”, the Sage workers’ struggle to defend their human rights

The heroic care workers, cleaners and maintenance workers at Sage Nursing Home came together last week to launch two separate legal cases against their employer for victimising them and for breaching their human rights.

Organising any workplace is never easy, with bosses tending to do everything in their power to prevent workers from coming together and exercising their collective power to ask for fair wages and working conditions, often going so far as to ignore workers’ employment rights, and in some cases, their human rights.

And this is exactly the situation that the Sage workers found themselves in in October of last year. For seven long months they tried to negotiate with Sage’s trustees over pay, working conditions, discrimination and bullying in the workplace, but all their attempts were ignored.

It became apparent that taking industrial action, something they had wanted to avoid doing at all costs, was going to be the only way to make their voices heard.

Between them they have amassed hundreds of years of services to Sage and its elderly and vulnerable residents, and at the root of their discontent, was the simple idea that carers should also be cared for; that carers are skilled, deserve a fair wage, and fair working conditions, and that by having these, not only would they personally benefit, but so would Sage and its residents.

But this simple idea led to a full scale attack on the workers’ human rights. One worker, Bella Ruiz, began the organising drive at Sage and when she filed a complaint against a nurse, instead of having her complaint dealt with objectively and independently, she became the object of a union busting witch-hunt.

When asked in an interview about how this victimisation affected her, Bella said the following, “They started sending me letters, calling me into meetings and saying I was putting the lives of the residents at risk. The environment was hostile. I started to suffer from severe headaches, hair loss, anxiety and cried a lot, I was on medical leave several times. I couldn’t cope with the pressure, so I decided to resign”.

Unfortunately Bella’s story is a common one, and gets played out everyday in workplaces up and down the country but is rarely ever heard. But with her former colleagues, Bella is now speaking out and fighting back and is bringing a legal challenge against Sage.

Her case is being pursued alongside a separate case jointly filed by 14 of her former colleagues. Because yet again, rather than listen to the workers and their concerns, the Trustees of Sage – like so many other bosses – decided to try to intimidate the workers into not pursuing strike action rather than listening to the reasons why they were going on strike in the first place.

In October last year, when Bella and her colleagues were voting on whether to strike, the workers received a letter from management, the letter explicitly told them not to strike and strongly suggested that doing so would result in job losses and “intimidation” from UVW. But bravely, the workers continued, as they knew by that point that striking was their only chance to get the living wage and sick pay they have so long been denied.

The power these workers feel at finally raising their voices and being listened to is palpable and was best summarised by Bella when she said, “I am proud that I have not remained silent and have raised my voice for dignity. We all deserve to have healthy work spaces and bosses who respect the rights of their employees”.

To find out more about the Sage Nursing Home campaign and how you can support the workers, click here.