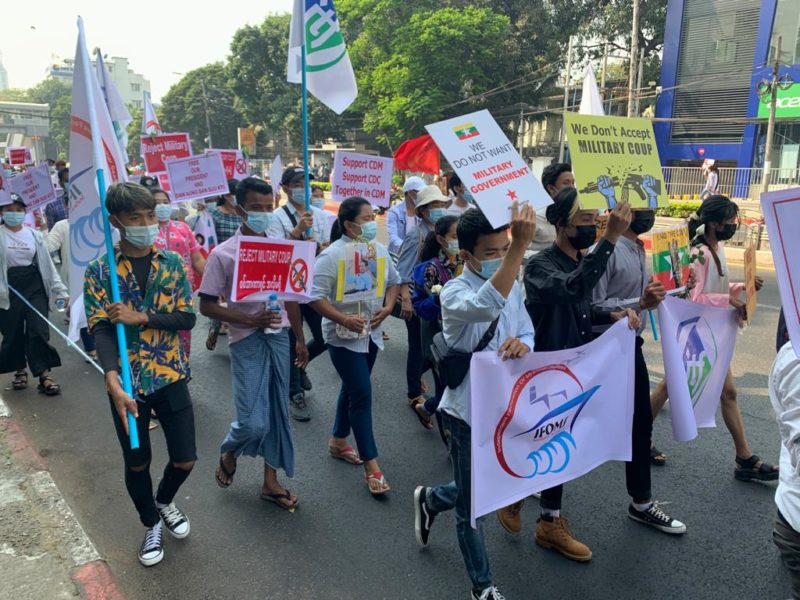 United Voices of the World (UVW) has penned an open letter to our comrades in the Independent Federation of Myanmar Seafarers (IFOMS) to express our solidarity with their struggle and to salute their role in organising the civil disobedience movement in Myanmar.

In 2019, several comrades from IFOMS visited the UVW office and told us of how they had built their own union from scratch after the end of military rule. They generously gave their time to exchange ideas with UVW members on the always important question of “how do we continue to build workers’ power?”, their story was truly inspiring.

Like UVW, IFOMS is a democratic, independent, inclusive, and anti-racist trade union, it is multi-ethnic and open to all seafarers, irrespective of faith, gender, or sexual orientation. Many of our comrades in IFOMS are at the heart of the civil disobedience movement, training activists and organising protests by day and going into hiding at night.

We have watched with horror the events in Myanmar over the past few weeks, seeing the military coup unfold. The violence and brutality used against peaceful protesters is shocking and the spiralling death toll is deplorable. IFOMS is an inspiring grassroots trade union, and like UVW it stands against oppression of ordinary workers. It was the end of military rule that allowed for IFOMS’ creation, for Myanmar seafarers to finally form an independent union, defend their rights and fight for the dignity and respect at work that they deserve.

Trade unions cannot function under military rule that overtly threatens the rights and freedoms of workers to join independent unions, peacefully protest and take industrial action. We are very concerned for the safety of our IFOMS comrades as they exercise their democratic rights to demonstrate against this illegitimate military takeover. UVW strongly condemns the military coup and the violence and intimidation being used against our trade union comrades and other citizens.

As a direct action union, UVW salutes IFOMS’ role in the civil disobedience movement. We continue to follow developments in Myanmar and hope to see democratic structures established swiftly which allow for IFOMS to resume its important trade union work.

UVW is with you.

If there is anything we can do to support you in your struggle, please let us know.

Dear sisters and brothers of UVW,

Sincerest thanks for your support and solidarity. Since the military coup IFOMS, has vigorously opposed this brutal assault on our fledgling democracy. Despite the savage attacks on us by the security forces, we continue to work with other unions, workers associations and the Civil Disobedience Movement (CDM) across our country. We are demanding real democracy for all of Myanmar’s citizens.

Unlike previous citizen uprisings against the army, we now have independent unions in Myanmar and unions are at the forefront of the fight for democracy. Unions are organising strikes, boycotts and participating in demonstrations. However, the strikers are suffering serious financial hardship. Many are struggling to put food on the table for their families and buy basic necessities. Any kind of solidarity or strike fund that UVW could organise for these strikers would be a massive help to our struggle.

Unions are vital for the fight for democracy. Without effective unions there can be no democracy, there is only dictatorship by the elites.

Sunday March 14th was the bloodiest day of the coup so far, with martial law being extended and 44 protestors being killed by state forces. UVW has learnt from contacts on the ground that the military has also imposed an internet curfew.

Donate to the strike fund here.