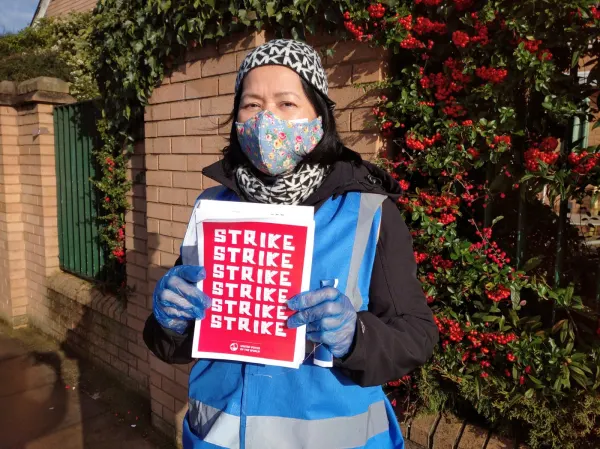 UVW members at a North London care home served notice of industrial action on their bosses this week sending a clarion call to all low paid, migrant, and precarious key workers to get organised and fight for a living wage.

Carers, domestic, and maintenance workers at Sage Nursing Home in North London will commence strike action on 20 October. This move following months of empty promises to work together, delaying tactics and a failure to take action over what UVW members believe to be unfair dismissal and disciplinary action of long-serving workers and UVW members, Adam and Shamila.

“We built a high profile campaign, supported by care workers around the UK, that led to strike action at the start of the year in the harshest of conditions during a global pandemic lockdown,” said Bile a senior care worker at Sage and newly elected member of UVW Executive Committee.

“Yet Sage Nursing trustees not only failed to keep their word but they also continue to preside over a workplace that is short-staffed, mismanaged and where bullying, favouritism, and a blame culture is rife. They have tried every trick in the book to break us but our resolve is stronger than ever” he continued.

Noemi, a domestic worker in the nursing home laundry room said that “during these difficult times, while everyone was under lockdown, we continued to wash, clean, and look after the elderly with dedication, joy and compassion. All key workers deserve to earn a living wage, not the measly poverty pay we are on at the moment of 8.91 we receive as a minimum or 9.60 per hour some receive as a maximum. I work 6 days a week, we haven’t received a pay raise for 8 years. Instead, the trustees chose to reward us with empty promises and unfair treatment.”

The response to the strike notice by Stephen Goldberg, Sage Nursing Home Trustee, was to call the demands for a living wage,  “unrealistic” and declare that “Your members’ actions are of themselves self-destructive however the choice is theirs”

The nursing home is governed by a Board of Trustees that includes Benzion Shalmom Elizer Freshwater, a renowned and generous philanthropist who is also a trustee of many other charities and was estimated to have a net worth of over £2 billion in 2020. UVW union maintains that a nominal donation to the nursing home to ensure all employees earn a living wage and receive a sick pay scheme that makes it financially viable for them to take time off work when ill in order to protect their health and that of Sage residents is not unrealistic.

A UVW spokesperson said “The response from the Trustees is most regrettable. The Trustees have it within their means to meet our members’ request. It’s high time they take a closer look at the workplace culture and practice. It is simply astounding that Mr Freshwater, as a Trustee of Mayfair Charities constitutionally committed to “the relief of poverty”, is not cognisant that the employees of his nursing home live on or even below the poverty line in some cases.”

For the lowdown on how to support the workers on a strike day, join us here >>