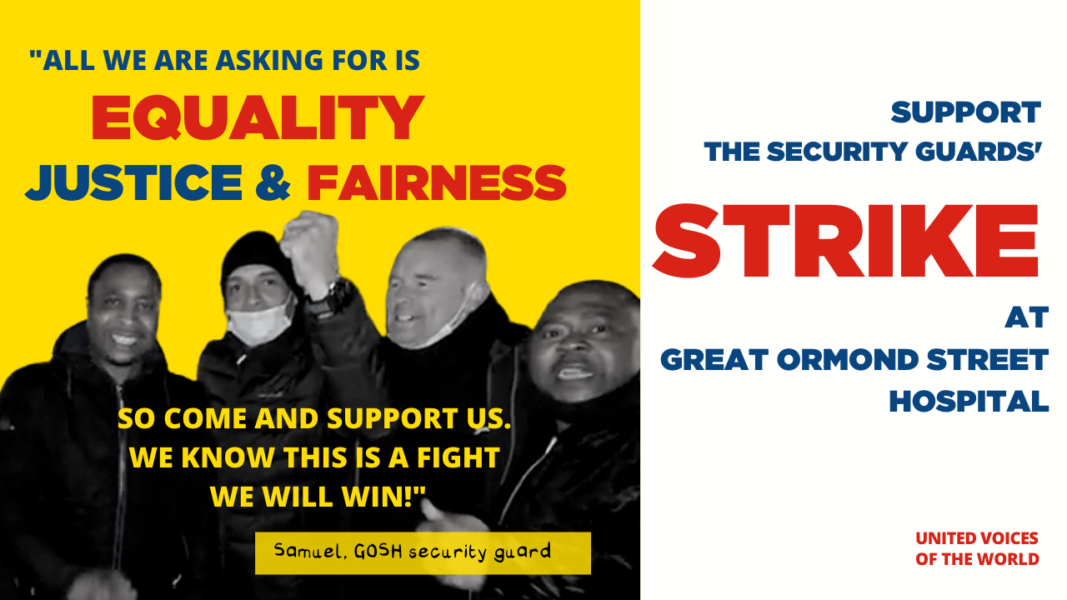 Security guards at Great Ormond Street hospital are poised to take to the picket line on 6th, 7th, and 8th December as part of UVW’s fight to beat outsourcing and to fight against what we believe amounts to indirect institutional racism. Security guards have followed in the footsteps of their domestic staff colleagues by voting to take strike action. The unanimous vote to strike closed earlier this month, came hot off the heels of UVW members who work as cleaners and who won their demands for full equality with in-house NHS staff in October. Likely emboldened by the victory, 100% of workers who took part in the ballot voted ‘YES’ for strike action.

Despite repeated attempts to talk to GOSH Trustees we have been met with silence. That’s why our members will be going on strike which GOSH has had every opportunity to avert. And they will have our full support to fight for as long as it takes until they win what they deserve: Dignity and Equality

“We are going on strike because we feel that we have not been treated fairly and we’ve been discriminated against. GOSH is made up of departments of families. If you take security out, it’s not going to be complete. If you take a clinical department out, it’s not going to be complete. And in a family circle, even when one member of the family feels he’s been left behind, or he’s not been treated fairly, there’s always going to be a reaction. We ask ourselves, are we less human than others? We begin to question why we should be working in the same environment and why there is this 2-tier system where others get different benefits, when we do the same or more”.

“GOSH is a world-renowned hospital and it doesn’t want to get a bad image. Picket lines attract the media and cameras and they don’t like that. I know this because as security guards, if ever we see a camera outside the hospital, we immediately ask them what they are doing there and if they have permission to film. Now it’s going to be us on the picket line.”

Peter Akintoye, another security guard at the hospital said:

“This fight is a fight we want everyone to back us on. We want everyone to know that what we are requesting is fairness, that’s all. We want GOSH to listen to us, and to see this from a different perspective so that we can sit down and talk about the way forward.”

These security guards are mostly African migrants. As with most domestic staff they are saddled with precarious work contracts at the hospital. This time round, they have empowered themselves. They have taken a look at the 2010 Equality Act and are about file for indirect race discrimination in court.

For further information and interviews