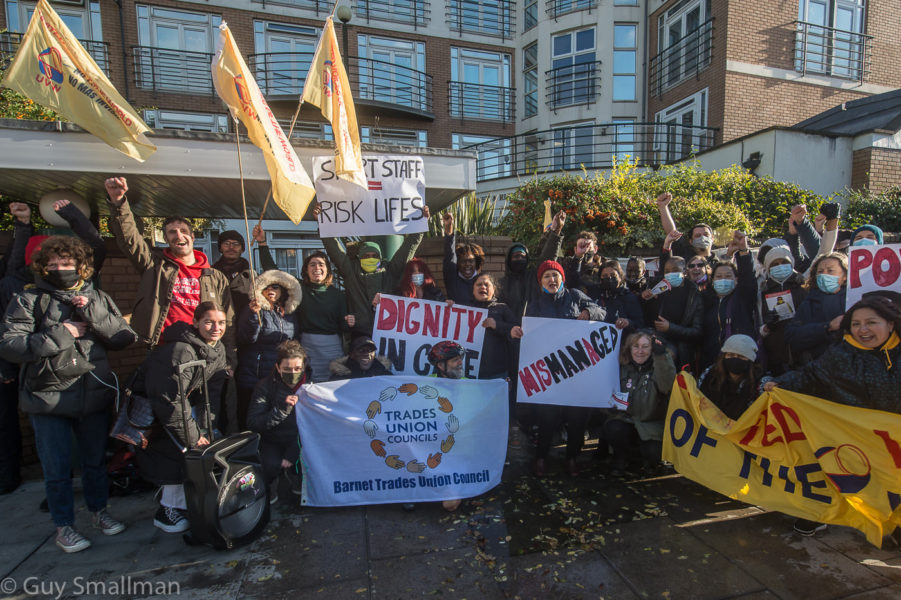 United Voices of the World (UVW) members, care, domestic and maintenance workers at Sage Nursing home in North London have declared a huge victory after a protracted dispute over poverty pay and decent working conditions.

Care workers, domestic and maintenance staff will receive the London Living Wage, resulting in a minimum pay rise of 11% and all other staff a rise of 5%, as of 1st December 2021.

Upon hearing the news, Bile, senior care worker at Sage and UVW executive committee member, said: “We went above and beyond to stand for what we deserve. We know that none of us acting alone can achieve success and we understand that there is still a way to go. We need to correct the legacy of past injustice and insist upon the will to change. Let there be work, bread, water, and water for all!”

The board’s announcement came in response to October strike action that made national news. The protest included a noisy and colourful picket line and a ‘Solidarity Bus’ to central London where workers surprised security staff at Freshwater House – the offices of billionaire trustee Benzion Shalom Elizer Freshwater in Central London – when they made a noisy entrance to deliver a letter detailing demands they said had hitherto fallen upon deaf ears.

Petros Elia, general secretary for UVW, said: “The trustees chose to ignore these Covid heroes and key workers, some of whom earn as little as £8.91 an hour. Instead, they called their demands unrealistic and called out their legitimate right to strike as self-destructive. They chose to ignore all attempts by UVW to engage in meaningful, good faith negotiations and any attempts to resolve the dispute were met with obfuscation and delaying tactics.

The strike garnered support from around the country and was seen as an emblematic dispute for precarious workers in the care sector. Ali Treacher, secretary for Care And Support Workers Organise, said: “The ripple effects of this win will be felt far beyond North London. The courage of these workers gives hope to all care and support workers everywhere to keep organising and fighting for dignity in care for all, the workers and those who require our support.”

The Sage Nursing Home dispute was sparked in March 2020 by one care worker who spoke out about the lack of PPE, poverty wages and appalling working conditions at the height of the pandemic. Read Bella’s story here.  Workers self-organised, joined UVW and built a high-profile campaign, supported by care workers around the UK that led to strike action at the start of the year during lockdown.

Benzion Shalom Elizer Freshwater is a trustee of Sage as well as many other charities and was estimated to have a net worth of over £2 billion in 2020. He is also a renowned and generous philanthropist and a trustee of Mayfair Charities Limited, constitutionally committed to “the relief of poverty”. The employees at Sage earn poverty wages and, in some cases, live on or below the poverty line.

Julia, care worker at Sage and UVW member, said “We held picket lines, distributed thousands of leaflets to the local community; 70 thousand people signed our petitions; members of Parliament signed an early day motion. We delivered this win, but the battle is not over. We are clear we must keep fighting to get what we want and what we – and the residents – deserve.”