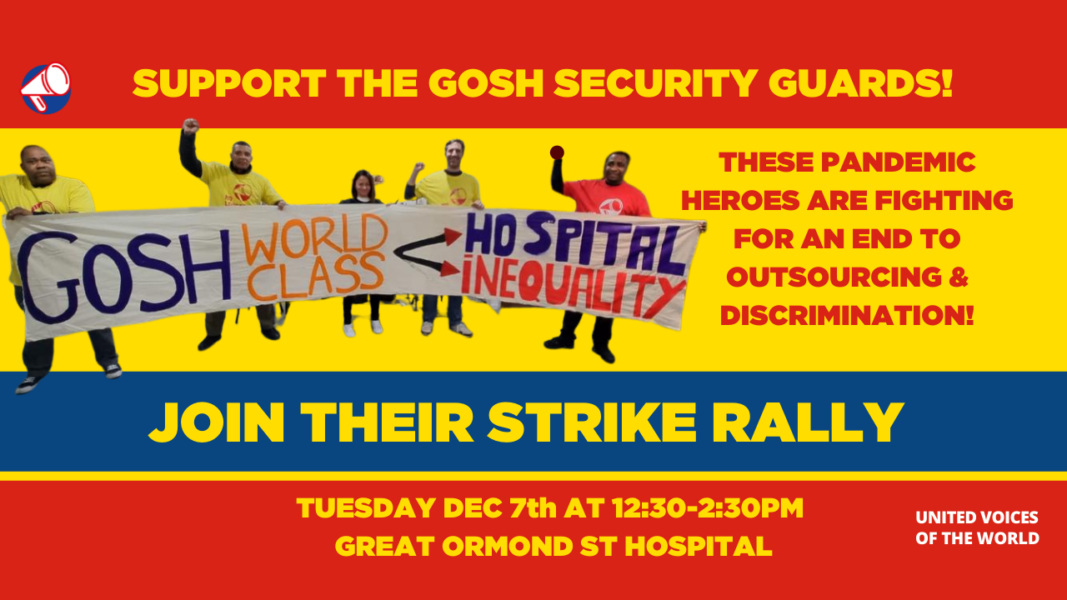 Most of the security guards are Black, Brown, and migrants. In June 2020, GOSH committed to do more to challenge racism and discrimination, and to “amplify the voice of BAME (sic) colleagues”. According to documents published online for public access, the minutes for a Board meetings clearly show that the hospital’s CEO had acknowledged the need for parity. The minutes read:

“The Board had been clear about the value these staff contributed to the organization and the importance of adhering to the Trust’s values. Matthew Shaw said that action would be taken to ensure that fairness and parity was achieved for all staff working at GOSH and this would be discussed with staff and the contractor in the coming weeks.”

“Despite repeated attempts to talk to GOSH Trustees we have been met with silence. That’s why our members will be going on strike which GOSH has had every opportunity to avert. And they will have our full support to fight for as long as it takes until they win what they deserve: dignity and equality.”

“We are going on strike because we feel that we have not been treated fairly and we’ve been discriminated against. GOSH is made up of departments of families. If you take security out, it’s not going to be complete. If you take a clinical department out, it’s not going to be complete. And in a family circle, even when one member of the family feels he’s been left behind, or he’s not been treated fairly, there’s always going to be a reaction. We ask ourselves, are we less human than others? We begin to question why we should be working in the same environment and why there is this 2-tier system where others get different benefits, when we do the same or more”.

“GOSH is a world-renowned hospital and it doesn’t want to get a bad image. Picket lines attract the media and cameras and they don’t like that. I know this because as security guards, if ever we see a camera outside the hospital, we immediately ask them what they are doing there and if they have permission to film. Now it’s going to be us on the picket line.”

Peter Akintoye, another security guard at the hospital said:

“This fight is a fight we want everyone to back us on. We want everyone to know that what we are requesting is fairness, that’s all. We want GOSH to listen to us, and to see this from a different perspective so that we can sit down and talk about the way forward.”

For further information and interviews