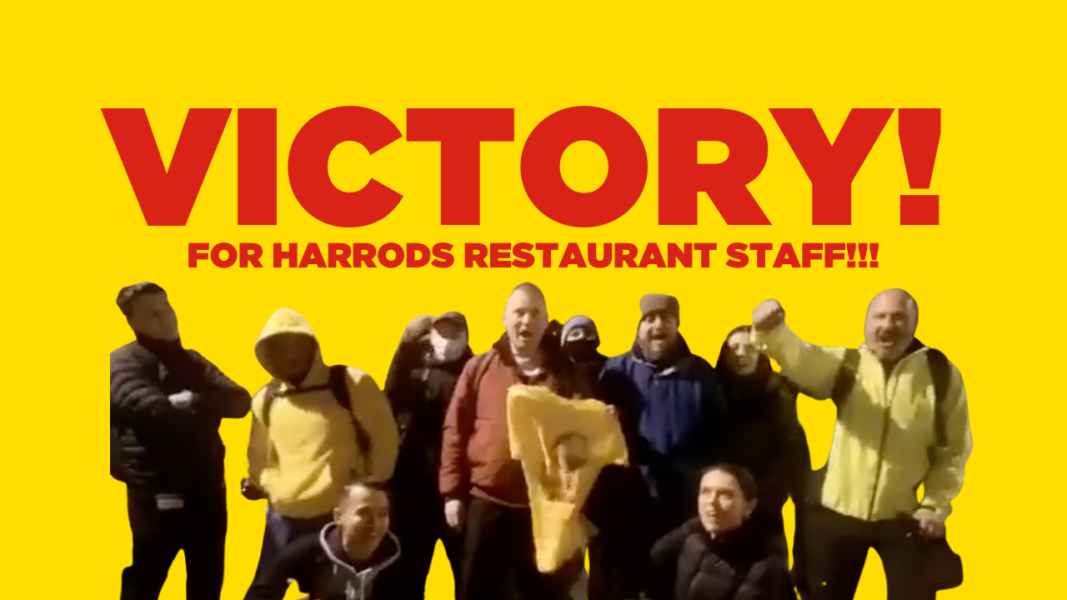 Restaurant workers at Harrods, London’s emblematic luxury department store, have won a huge pay rise of almost 25% for hundreds of waiting and kitchen staff. The win is one of the most significant in the history of hospitality in the UK and establishes a new benchmark for pay in the sector.

How did we do it? We organised and threatened to walk out over the Christmas shopping period. Our demands were met and we cancelled the planned strike before it went ahead, proving that collective action works!

As restaurant worker and United Voices of the World (UVW) member Mihaly said: “After weeks of organising with our union UVW, we are delighted that our bosses engaged with us and recognised our hard work. We will be getting the pay rise we have fought for and that we deserve – good news for us and workers beyond.”

For restaurant workers this pay rise means almost £5,000 more a year, and for some it will be up to 25% more than they got paid before. Harrods has also guaranteed annual increases of 3% from 2023.

Before UVW began this dispute, the department store, owned by the Qatari royal family, had been paying restaurant workers poverty wages of £9 an hour.

Our members made a stand and demanded a substantial pay rise from their employer as well as setting a precedent for others.

It’s not the first time that UVW members have confronted Harrods’ bosses. In 2017, we won the battle for the tips and made sure that 100% of the service charge would go to staff.  Before workers got organised and joined UVW, the company used to get a cut of the worker’s hard won tips, pocketing an outrageous 75% of them. Not any more they don’t.

The victory is already inspiring other Harrods staff to join the union. Petros Elia, general secretary for UVW, said that the union is “now talking with retail staff to ensure they are not left behind. We’ve been saying it’s time for £12 (per hour) and now that time has arrived.”

The fight continues… Watch this space!