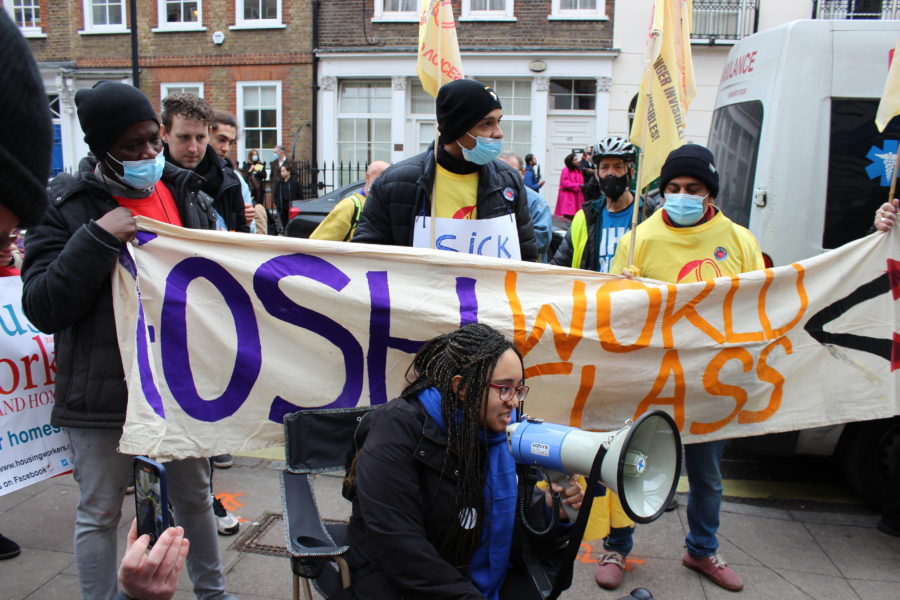 GOSH security guards call on the union movement to support their right to picket, threatened by injunction

“We call on all working class people, all unionists to join hands together, because we see an attempt to suffocate the voices of working people, to suppress the movement of the unions,”

The High Court on Thursday 10 February served United Voices of the World (UVW) union with a temporary injunction banning its Great Ormond Street Hospital (GOSH) striking security guards and their supporters from dancing, singing and even waving banners within 200 metres from the hospital.

This is an unprecedented legal ruling to silence workers and one of the biggest legal attacks against the human rights of the trade union movement in decades, and the guards and their union are determined to resist it vigorously. On Wednesday 16 February, they’ll be back in court for a full hearing where they will fight for the injunction to be ripped up.

In the meantime, the guards have redoubled their efforts to gain visibility and rally support.

They have embarked on a packed speaking tour meeting with MPs, Trades Union Councils, Labour party activists, NHS campaigners as well as fellow strikers at several other London hospitals and universities.

In an impassioned speech at the Cost of Living Rally in London’s Parliament Square on Saturday 12 February, GOSH security guard and striker Samuel Awittor called on the crowds to support the strikers right to picket and resist this attempt to silence them: “We call on all working-class people, all unionists to join hands together, because we see an attempt to suffocate the voices of working people, to suppress the movement of the unions.”

UVW’s general secretary, Petros Elia, said: “This injunction is the latest attempt by a powerful public institution to try and silence a small group of Black, Brown and migrant low-paid workers on strike for sick pay and against discrimination. This judgement should send a signal to the entire union movement that the right to strike and protest is not given and can be taken away by a single judge at any time.  It is also a sneak preview of what life will be like if the Police, Crime, Sentencing and Courts Bill becomes law, allowing employers to severely restrict the ability of unions to hold picket lines, with the threat of fines or imprisonment. We must organise to protect our hard fought for rights and UVW will continue to support the security guard members strike until victory. We have also made clear that we remain available to negotiate at any time, and hope that common sense will prevail and that the security guards’ reasonable demands will be met without the need to move to an all-out strike.”

The GOSH security guards began a 44-day strike on February 2 in pursuit of full sick pay and other NHS benefits they are currently denied, including NHS injury, maternity and overtime pay as well as parental leave and pension contributions. They are currently the only workers on site without NHS sick pay amid a global pandemic. Their strike is set to be one of the longest in NHS history.