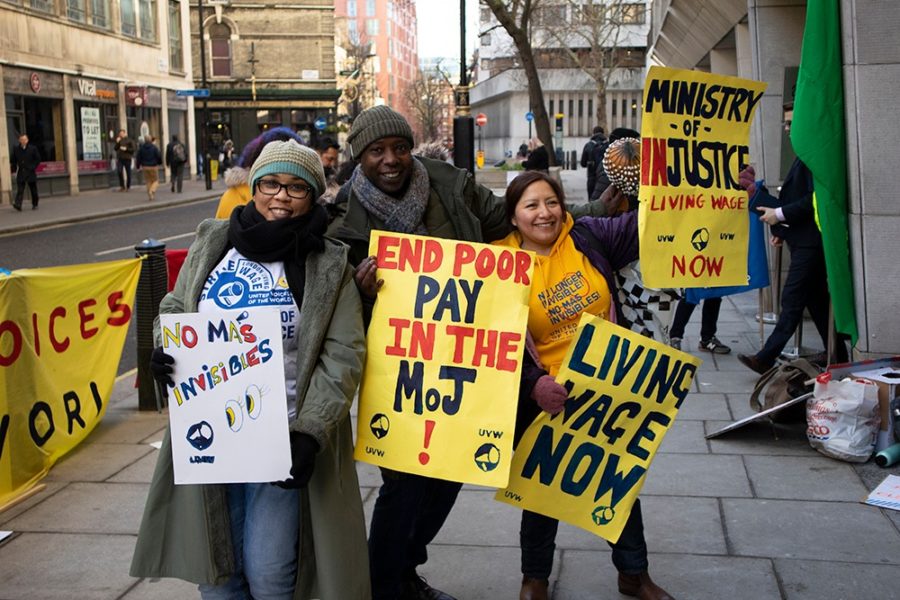 The new national minimum wage is a poverty wage. Let’s fight for more!

“I’m getting a 10p an hour rise from April 1… but what am I going to do with that, with all the costs going through the roof? …  We are on poverty wages and we are working more and more for less money. .. We are becoming slaves.”

“I’m having to ration my heating”. “ It is either food or heating”. “I’m living in debt”. “I’m constantly on overdraft.”  “Struggling to pay rent”, “can’t afford essential repairs”, “no new clothes or holidays”, “can’t afford to go back to education”…  These are a few of the experiences described by our members on a survey we conducted asking what they thought of the new minimum wage increase to £9.50 per hour for adults, which is coming into effect from 1 April 2022.  The new minimum wage is still below the recommended living wage for workers in the UK.

100% of United Voices of the World (UVW) members surveyed said this meagre rise is just not enough to live on and 89% say they are finding it harder to make ends meet, pay bills, buy food and clothes, keep warm and pay rent. £9.50 per hour is a poverty wage.

Workers are facing exorbitant increases in food and energy, with some members saying their bills have gone up by 50%. We are facing the worst decline in our living standards in the UK that any of us have known and members are worried about how to survive on meagre wages that can’t keep up with the cost of living. This derisive pay rise for the lowest paid doesn’t even offset RPI inflation, which hit 8.2% in February and is expected to rise further.

Efilsuver, a facilities services worker and UVW member who’s lived in the UK for the past 20 years said that his food, gas and electricity bill have literally doubled. “I’m getting a 10p an hour rise from April 1… but what am I going to do with that, with all the costs going through the roof? I earn the London Living Wage already and it’s almost impossible for me to make ends meet. I’m paying double what I used to for food, electricity, water and gas… so those 10p aren’t going to solve anything for us. We are on poverty wages and we are working more and more for less money.”

Efi, who lives with his two daughters who are studying at university and his son who is working as a delivery rider, thinks workers are slowly becoming slaves. “”Let the members of the government who design these policies go out to work, cleaning like us, to see if they can live on a wage like ours. Let them experience firsthand what a poverty wage is.  We are becoming slaves because we have no life. We do nothing but work, more and more hours for less and less money, and many of us do not even see our children because there is no time to do anything but work in order to survive.  The working class is being mistreated. ”

For Kachi, a legal worker and UVW member, the situation is compounded by the fact that she is a migrant.  She is expected to renew her work visa every two years at a cost of several thousand pounds, but on her wages just slightly above the minimum wage, she can’t afford it. She’s been very close to being homeless and has fallen into debt. “The costs of energy, food and rent keep rising even as their quality drops, and wages are staying virtually the same. It feels like we’re working harder to struggle more. It’s even more difficult as a migrant. I double pay for the NHS, and although I pay taxes, I have no recourse to public funds. I still have debts in the thousands to repay as I had to shoulder the exorbitant cost of visas. There’s just no room to breathe,” she says.

If you are not getting £9.50 from April 2022, make sure to ask for it. It is your right. But UVW believes we need more than that. We need better pay and also sick pay, maternity and parental pay, holiday pay, pensions… The only way to get this is to unite and fight for it together.

UVW is calling on workers to get together and organise in their workplaces and communities to demand a proper living wage and fight for our rights. We in UVW fight through direct, collective action on the streets and in the courts.  Come join the fight!