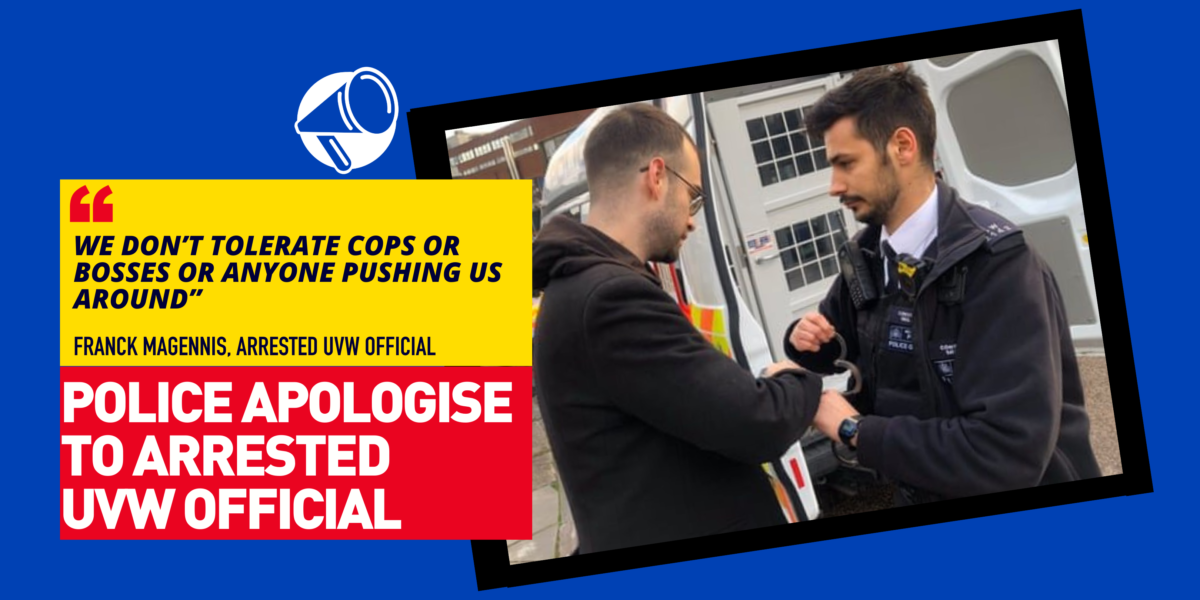 “We don’t tolerate cops or bosses or anyone pushing us around.”

The Metropolitan Police (Met) has apologised for the arrest of a United Voices of the World (UVW) union official on the picket line, settled a claim brought by the union after it aggressively dispersed its picket and paid compensation to both the union and its member worth a total £5,000, in a victory for militant trade unionism.

Two and a half years after his arrest the Met finally apologised to the former head of UVW’s legal department Franck Magennis and paid him £3,000 in compensation for detaining him while on a picket line organised by UVW outside St George’s University Hospital on January 13 2020.

The police turned up in large numbers, distributed leaflets on behalf of the university to dispel the lawful picket and threatened the workers and union officials with arrest unless they left the property. It detained and handcuffed Magennis when he enquired about the legal basis for the warning. “My impression is that they made this decision in advance”, Magennis says, “that they wanted to arrest someone in a way that was very visible so that everyone else in the picket line would see that someone was being arrested and see the handcuffs and would immediately understand the significance.”

The Met also agreed to pay £2,000 to UVW, settling a legal claim brought by the union under articles 10 and 11 of the European Convention on Human Rights  before it reached the courts. The articles refer to Freedom of Expression and Freedom of Assembly and Association respectively.

UVW put the police on notice of a claim to be brought against them for having aggressively dispersed the picket. The St George’s strikers and their supporters were forced to move and picket away from the university campus in a clear breach of their right to picket outside their workplace. The St George’s security guards had organised two weeks of strike action against poor working conditions of outsourced workers at the university. “When they told us to leave the university campus under threat of arrest they were in fact infringing our right to picket, because a picket line is where you stand outside your workplace and you talk to people and you explain your cause and try and convince them to stop working and support it,“ explains Petros Elia, general secretary of UVW.

In the letter signed by Inspector Andy O’Donnell of the Directorate of Professional Standards,  Civil Actions & Inquests, the Met apologised to Magennis, for “the way you were treated when you were arrested, put in handcuffs and searched”, adding that “the level of service has fallen below the requisite standard”. The apology concluded: “I would therefore like to express my regret for the distress that you have suffered as a result of this incident.”

Read the letter of apology here >>

Magennis, who is a barrister at Garden Court chambers, says this victory  “should send the message that we know our rights and that if the police show up and try and do the bosses’ bidding, if they set a foot wrong, if they make a single mistake, we will come down on them like a ton of bricks. They are not to mess with our picket lines because if they do we are going to defend ourselves. We don’t tolerate cops or bosses or anyone pushing us around.”

Intimidation won’t work with UVW, he says. “The day after the arrest, I came back to the picket line to make it clear that we were not going to be intimidated and told the workers that we were going to sue the police. We spend most of our time going to work and yet we have so little control over our workplaces, so what’s so impressive about UVW is that we punch above our weight and we boldly assert working class power.”

“This is a huge win for UVW and the wider movement, and one that reaffirms our human right to strike free from intimidation”, Elia points out. “By settling UVW’s legal claim they seem to have acknowledged our view that aggressively dispersing our picket was a violation of our human rights, our freedom of expression and freedom to picket and protest. UVW never has, nor will we ever tolerate any form of union busting or picket line intimidation from cops or bosses and we will fight back any time they come for us and try to trample on our hard fought for rights.”

At a pivotal moment for the wider union movement, when workers are exercising their right to strike up and down the country amid a cost of living crisis, our victory against strike-breaking and intimidatory police tactics has huge implications for the wider union movement  “We hope that cops – and the Met in particular with their rancid history of racism, discrimination and violent union busting – take note of this win and think twice before coming for our or any union members again. We hope it will send the message that we know our rights and we defend them.” Elia says.