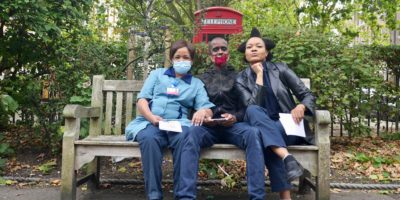 After outsourced cleaners at Great Ormond Street Children’s Hospital (GOSH) joined UVW in their droves and submitted a 45-page formal claim to the GOSH Board detailing the financial, industrial and clinical benefits of ending outsourcing and switching to an in-house cleaning model, the CEO of GOSH, Dr Matthew Shaw, has finally issued a statement in response to the claim, the full transcript of which can be read below.

On behalf of the Board, Mr Shaw said the following: “we will do absolutely the right thing in relation to terms and conditions….in order to achieve parity and fairness across all staff who are working in Great Ormond Street.”

This statement was delivered 15 days after submission of the cleaner’s claim and was made at a GOSH Board meeting on 26th November, which was open to the public and attended by cleaners and officials.

Despite previously abnegating all responsibility for the cleaners’ well-being and terms and conditions in an email to UVW, and despite the overt hostility towards the cleaners and UVW officials in the meeting, which saw some cleaners prevented from joining whilst others were silenced and union officials ejected, Mr Shaw’s statement has, “given some cause for hope”, said Petros Elia, UVW’s Lead Organiser.

However, according to Mr Elia, “Matthew Shaw’s refusal to meet with the cleaners and their trade union of choice, UVW, and his failure to lay out a time frame for achieving parity and his silence on the issue of ending outsourcing, has done little to placate the cleaner’s well-founded indignation”.

He then went on to say, “The cleaners never asked, nor would they ever settle for mere parity. They want GOSH to live up to its ‘Always OneTeam’ ethos and to be made employees of GOSH where they will be equals, and truly part of GOSH’s ‘OneTeam’. Anything less would be a reprehensible commitment to continuing to treat the almost entirely black, brown and migrant cleaners as second class and unworthy of equal status, treatment and terms and conditions as their NHS colleagues. Consequently, preparations to ballot for industrial action, something we had hoped could be averted through dialogue, will now be commenced, as will a group legal claim on behalf of the cleaners which will arguing that the terms of the current outsourcing arrangement amount to unlawful race discrimination in breach of The Equality Act 2010”.

Alpha Anne, a domestic at GOSH and one of the strike leaders, also said the following: “Yesterday I was not allowed into the Board meeting to make my case which I think is shameful. I give so much to this hospital and to the Great Ormond Street Charity and this is how they treat me. We’ve have now been left with no choice but to strike, because we cannot accept discrimination. We want equality now.

If you wish to support the campaign please contact petros@uvwunion.org.uk with details of who you are and in what ways you wish to offer solidarity.

“I have spoken to several groups of cleaners over the past few months, and myself and the [Great Ormond Street Hospital] Board have heard what you said, in terms of the terms and conditions that you’re currently under. Obviously you’re all currently OCS employees, the Board will know this service is outsourced to OCS, but we have heard how some people are on differential contracts, the limitation of sick pay, limitation of holiday pay, and how many of you feel that you have been treated poorly by the current supplier of the service. We’ve listened to that and we’ve heard that.

You will also know that it’s the Trust’s strategy, and within our values, that we will always try and do the right thing within the organisation and we really do value all of the services that currently OCS perform, and all the things you do to make the hospital work, it would not work without you, and I know that all staff hugely value the contribution you’re making in the organisation currently.

I’m not able today to announce what we will exactly be doing in relation to the service as a whole, but what I will say is this, is that we have heard, and we will do, absolutely the right thing, in relation to terms and conditions and how we take things forward, in order to achieve parity and fairness across all staff who are working in Great Ormond Street.

And that is a commitment we make and a commitment we make as a Board. And therefore, over the coming weeks we will then be talking to staff, talking to OCS about the direction as we move forward, but that is the position as we stand at the moment, and I wanted to give you that, in order to say how much we value you, and how much we do stand by our values and our new strategy, and how much we will do the right thing, and I’ll leave it at there Chair, thank you”