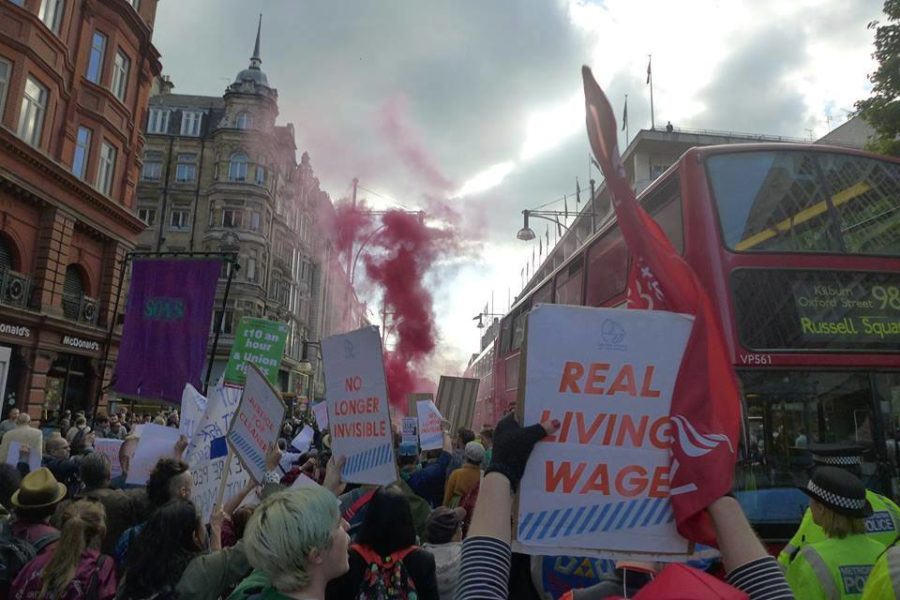 John Lewis Protest: bring the Cleaners into the partnership!

John Lewis makes well over £100 million in profit a year despite a recent slump, and pays its Chariman over 70 times what the cleaners, who are memebrs of UVW, earn.

Nonetheless, John Lewis insists on denigrating and treating their cleaners like second class citizens, who they despicably outsource for no other reason than to deprive them of the same benfits that in-house staff receive.

Not only are the cleaners paid poverty wages of £7.29 per hour – which will be insultingly increased by only 6p an hour to £7.35 an hour on 18th October – but they are excluded from the famous partnership model lauded by all.

Consequently the cleaners do not benefit from the store discount, the annual bonus, even if it has fallen from 17% to 11% in recent years, or even the minimim wage of £8.20 per hour which comparable in-store workers (aka “partners”) receive before the bonus.

Worse still is that the annual bonus is publicly announced every year in store. This means the cleaners are forced to watch everyone celebrate and then sweep up the confetti and mop up the spilt champagne as a cruel reminder of their second class status within John Lewis.

We have received guarantees by John Lewis’ contractor that by 1st November 2016 we will receive a response to our very simple and fair demands for the cleaners to receive parity of pay and terms and conditions of employment with in-house staff. After all, outosourcing does not and cannot justify a two tier workforce, especially within a “partnership”.

However, if John Lewis refuses to engage in meaningful negotiations, or continues to falsely deflect responsibility to their contractor, and continues to treat and pay the cleaners so contemptuously, then this protest will proceed and will mark the start of a what could become a protracted industrial dispute which will be relentlessly fought until justice is served.