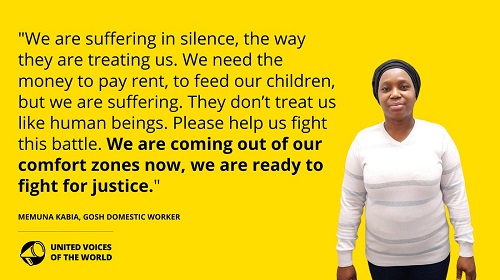 “I was begging for just one day, but she [my manager] denied me my right to go and see my sister when she was dying. I never got to see her before she died”, suffering in silence at Great Ormond Street Hospital

Memuna Kabia has lived in London for 21 years, she has two children and has been working at Great Ormond Street Hospital (GOSH) for 15 years. Over those 15 years, she has worked for three contractors: ISS, Mitie and OCS. She believes OCS has been the worst by far, with shocking levels of negligence and disrespect leaving her ready to fight back.

Memuna explains how OCS communicates poorly, doesn’t want to know or care about how the workers feel and requires them to make ‘appointments’ for meetings with managers even in emergencies when they are in need of immediate assistance. Sometimes a meeting with a manager can take weeks to get.

Memuna explains how, “Appointments take forever to make, sometimes weeks, if it is an emergency, the emergency has long passed by then. It isn’t normal for a workplace manager, it is almost like a GP’s office. But even with a GP, if you called and said it was an emergency, they would bring you in that day.”

There are two significant examples of the pernicious effects this policy has had during Memuna’s time with OCS.

The first was when her sister was dying from cancer earlier this year. Her sister wasn’t far away, she was at St. Thomas’ Hospital in Central London. Memuna was told she had little time to get there to say goodbye. But when she asked her supervisor for emergency leave, her supervisor said she couldn’t give it to her without her manager signing the paper.

Memuna explains how, “I begged [my manager] for the day off, but she said ‘no’, I had to book an appointment. I was begging for just one day but she denied me my right to go and see my sister when she was dying. I never got to see her before she died.”

A second incident occurred one morning when Memuna locked herself out of her apartment, she had gone to take out the rubbish and the door swung shut behind her. She called her supervisor and told her she would be late. Her shift was supposed to start at 7am and Memumna said she would be there by 9am.

Memuna managed to make it in before 9am and offered to use her breaktime to clean the lifts and stairs – the part of her duties that she had missed during the first hour. Her supervisor told Memuna that her manager had been looking for her all morning.

But Memuna became very worried, she started crying from the stress, and felt frustrated too, because she wasn’t even supposed to have been working that week. She had cancelled her holiday to work because it was the beginning of the Covid-19 pandemic and the hospital was short staffed. Memumna felt she had done OCS a favour.

Her manager called her to her office for a meeting, Memuna remembers how, “I walked into the office crying, holding a tissue in my hand and gripping the table because I was shaking.”

Her manager called her a liar, saying she had never called, and sacked her without letting her explain. Memuna asked her manager to provide her with a termination letter, but her manager said no and that she would get one in the mail later.

Memuna goes on to explain that, “I wondered, is this what I am sacrificing myself for? After I stood my ground and asked for a termination letter before I left, [my manager] called security, and the security man marched me outside like I was some sort of criminal.

[My manager] wrote a letter saying that I was screaming and shouting in that meeting, that everyone in the hospital could hear me. But there were offices all around her, if I had been screaming like she said I was, wouldn’t people have come out? No one came out of their offices.”

After two and a half months, OCS recontacted Memuna and she was given her job back with a warning letter.

Memuna goes on to explain why she and her colleagues need to be in-housed and made NHS staff. She says, “The money, the respect, an end to this bullying and harassment… contractors don’t care. They do whatever they want to do. We want opportunities and holidays. We are suffering in silence, the way they are treating us. We need the money to pay rent, to feed our children, but we are suffering. Now we have the time and the voice to say it, now UVW can help us speak up. They don’t treat us like human beings. Please help us fight this battle. We are coming out of our comfort zones now, we are ready to fight for justice.”

If you want to help Memuna and her colleagues in their fight to brought in-house and get the respect they deserve, please donate to their strike fund and sign this petition calling on GOSH CEO Dr Matthew Shaw to negotiate with the workers.