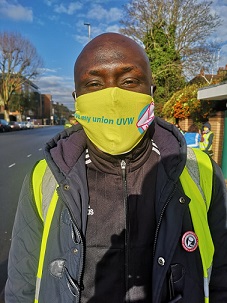 This week the battle for recognition at Sage Nursing Home in North London takes a new turn as all domestic staff and care workers will decide whether or not to vote for trade union recognition in their workplace.

The ballot that opened yesterday is the latest development in a battle for recognition that started in Spring 2020 when workers joined UVW and called for voluntary recognition. Their request was denied. UVW members responded by springing into action and launching a campaign for a real living wage, decent sick pay, and annual leave.

Their union, UVW, began the process of applying for trade union recognition, which if granted would mean that by law Sage would have to sit around a table and negotiate with workers through their trade union.

This recognition ballot comes as the second ballot to strike closed on Friday 23rd April in which UVW members returned a 100% Yes vote to strike. Their message to Sage is clear: with or without recognition they will not be silenced and their voices will be heard on the streets, in the home and at negotiating tables.

In the weeks leading up to this ballot the tensions in the nursing home have been building. Staff have been under immense pressure, with workers reporting to UVW feeling encouraged by Sage trustees to join another, bigger union and for making workers feel they might lose their jobs with a vote for recognition. But undeterred, the workers remain united, strong and prepared to vote.

Care worker Bile says “We have been waiting for this day for a long time: today is the day the ballot for recognition opens, today is the day we vote for a voice at work. Our message to the board of Sage is positivity! We want recognition because we want to work together to make Sage a better place for residents and staff.”

Domestic worker Noemi says “Regardless of the outcome, we will keep together and keep fighting for dignity and respect. We are key workers, we are skilled professionals, and we know our jobs well. We will not be silenced. It is time for key workers everywhere to stand up and demand more.”