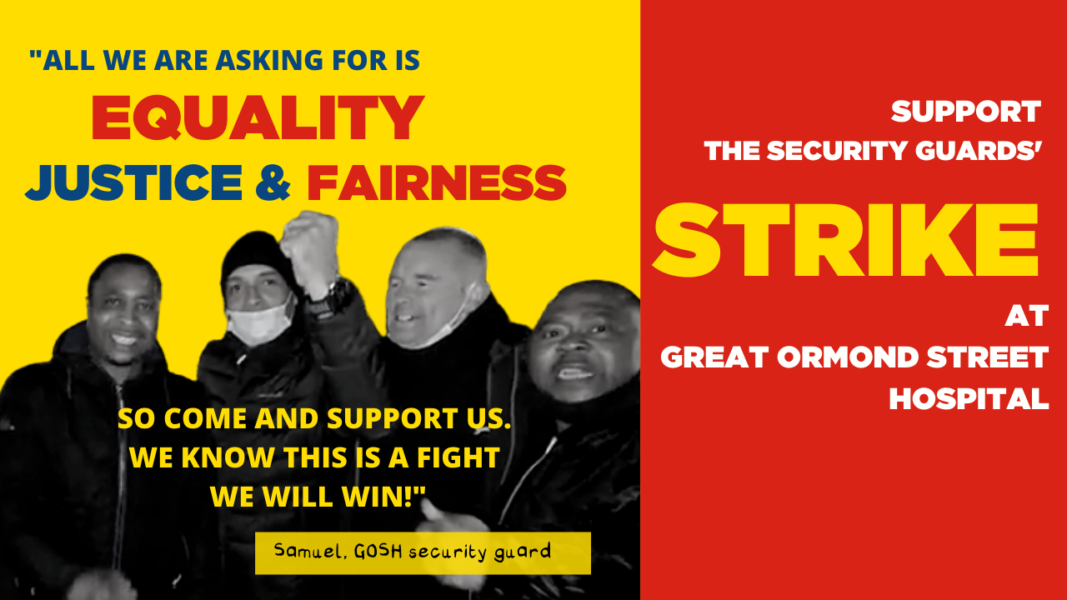 “GOSH is made up of departments of families. And in a family circle, even when one member of the family feels he’s been left behind, or he’s not been treated fairly, there’s always going to be a reaction.”

Security guards at Great Ormond Street hospital have followed in the footsteps of their domestic staff colleagues by voting to take strike action. The unanimous vote to strike closed earlier this week, and came hot off the heels of UVW members who work as cleaners and who won their demands for full equality with in-house NHS staff in October. Likely emboldened by the victory, 100% of workers who took part in the ballot voted ‘YES’ for strike action. They are requesting the end to outsourcing and full NHS pay and terms & conditions.

“We are requesting a legal strike because we feel that we have not been treated fairly and we’ve been discriminated against,” said Samuel Awittor, who has worked at GOSH for more than 7 years. As one of the security personnel there, Awittor has worked through the pandemic during which he saw his role change dramatically, with a litany of extra roles added to his duties such as portering, assisting patients and longer hours manning the building.

Most security staff saddled with precarious work contracts at the hospital are from Black/Brown and migrant backgrounds: “We ask ourselves, are we less human than others? We begin to question why we should be working in the same environment and why there is this 2 tier system where others get different benefits, when we do the same or more” said Awittor.

Another worker leading the fight, Alain Fieulaine, said “GOSH is a world-renowned hospital and it doesn’t want to get a bad image. Picket lines attract the media and cameras and they don’t like that. I know this because as security guards, if ever we see a camera outside the hospital, we immediately ask them what they are doing there and if they have permission to film. Now it’s going to be us on the picket line.”

United Voices of the World (UVW) union said despite repeated attempts to talk to GOSH Trustees they have been met with silence. A UVW organiser said: “They have refused to meet or engage in talks with UVW, the union of choice for these workers, have made no attempt to negotiate despite being warned on numerous occasions”.

This is the fifth positive ballot for strike action which UVW has conducted for workers this year and is unlikely to be the last.

Peter Akintoye, another security guard at the hospital said: “This fight is a fight we want everyone to back us on. We want everyone to know that what we are requesting is fairness, that’s all. We want GOSH to listen to us, and to see this from a different perspective so that we can sit down and talk about the way forward.”