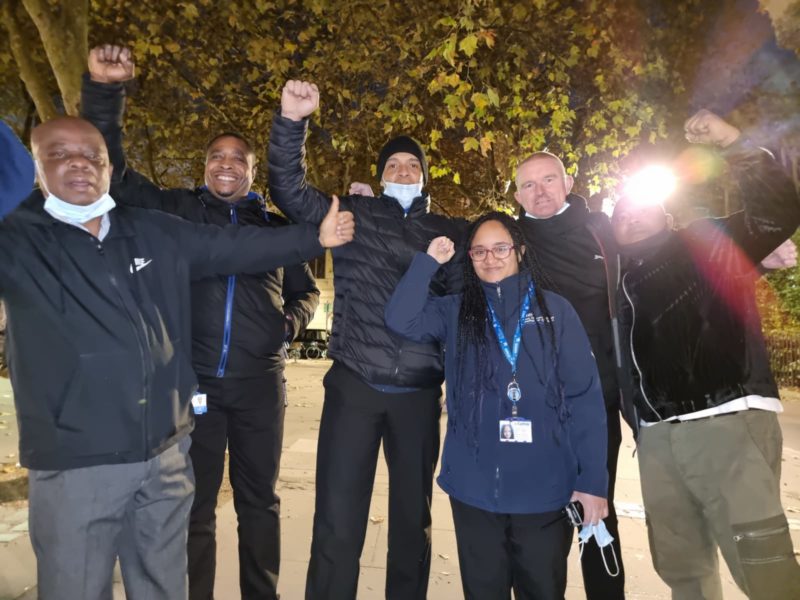 United Voices of the World (UVW) has called on the Great Ormond Street Hospital Charity CEO Louise Parkes to help avert a strike at the hospital by living up to their mission statement.

Outsourced security guards at Great Ormond Street Hospital (GOSH) are set to take strike action in early December, as they are currently on worse terms & conditions than other NHS workers. Giving the security guards, who are predominantly Black and brown migrant workers, inferior contracts, is an example of structural racism.

UVW has called on the GOSH Charity, who are the biggest donor to the hospital, to intervene in the strike and call on the hospital to bring the security guards in-house on the same contracts as other NHS workers. The GOSH Charity’s own Equality, Diversity and Inclusion (EDI) Strategy statement calls for: “creating a fairer society, where everyone is treated with dignity, respect and without discrimination”.

The security guards at GOSH, who have worked through the pandemic keeping staff and patients safe, deserve to be treated with dignity and respect. The workers are taking strike action as a last resort as the bosses at GOSH refuse to negotiate with them or UVW, their union. Now is the time for the GOSH Charity to turn their words about creating a fairer society into action and help to avert the strike.

Support the fight for equality and meet the workers here >>

A copy of the letter sent to the GOSH Charity CEO Louise Parkes by UVW is below.

I write to you today as Chief Executive responsible for the operational management of GOSH charity.

As the general secretary of the trade union United Voices of the World, I share your commitment, vision, and ambition to do more to create an inclusive society and workplace. But I am concerned that your commitment is falling short for the following reasons.

There is a group of workers, mainly BAME migrants, at GOSH Hospital who are being treated as second class citizens. GOSH security guards, we are sure you will know, work alongside NHS staff every day to keep all safe and secure.

You will also be aware that every day during the pandemic they went above and beyond their roles and responsibilities to make sure the hospital could still function for the patients, families, and NHS staff that work together to battle illness. Despite this, they are employed on inferior terms and conditions, creating a two-tier system. By way of example, they are the only group of workers at GOSH who do not get full pay sick pay scheme, let alone NHS sick pay. This means they cannot afford to take sick leave and risk coming to work when ill and infecting GOSH patients. In normal times this is immoral and reckless, in the middle of a pandemic this is callous and negligent.

The security guards deserve better than this, they deserve to work in a hospital that is, to quote from your own mission statement: “about creating a fairer society, where everyone is treated with dignity, respect and without discrimination”.

We believe that the inferior contracts that the security guards are employed on through a private contractor are not only immoral but also unlawful under the Equality Act 2010 as the discriminatory implications of this situation have not been assessed or mitigated against in breach of GOSH’s Public Sector Equality Duty. Further, denying of a majority BAME outsourced workforce parity of basic T&Cs with in-house staff is unlawful indirect race discrimination i.e institutional racism, as was recognised last week in the employment tribunal.  For this reason, the security guards have reported GOSH to the Equality and Human Rights Commission and are imminently commencing legal proceedings.

In addition, the security guards will be taking strike action from 6th-9th December.

Thier strike will be supported but many people, from patients to healthcare professionals to MPs and the wider trade union movement. This attention will shine a very ugly light on GOSH hospital’s indefensible practices, and by association on GOSH Charity.

I want to make it clear that we had truly hoped it would not come to any of this, but the conduct and decisions of GOSH have left the security guards with no choice.

However, we still hold out hope that the legal and industrial action that is about to ensue can be averted. We are aware you are not directly responsible this situation, but as GOSH’s largest donor and UK’s largest hospital fundraising charity and the largest dedicated funder of paediatric research in the UK, we call upon you to use your influence to ensure security guards are offered full NHS Agenda for Change contracts as is already offered to the cleaners, porters and caterers. The difference of treatment of security guards is simply without justification.

I will leave you this video of a former patient at GOSH expressing her shock at the treatment of security guards and offering her full support their demands, and the action they have been left with no choice but to take. We trust that your share her views.

I look forward to your reply.

United Voices of the World