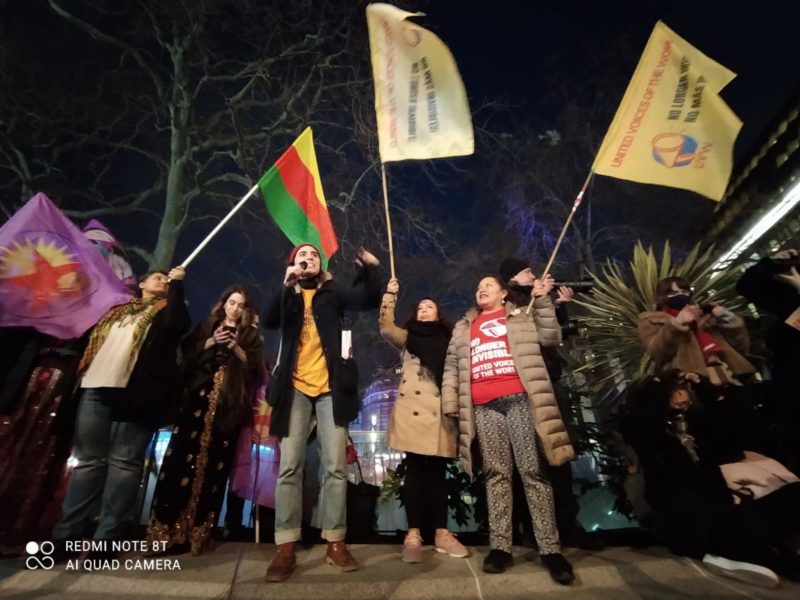 United Voices of the World were proud to take an active part in the Women’s Strike rally. UVW organiser Maggie Hayes was there and she wrote this account.

Women’s Strike Assembly organise a demo and rally every year on 8 March – International Women’s Day (IWD). The date for IWD was chosen as it commemorates collective, industrial action taken by migrant women in sweatshops in New York in 1901. They took to the streets to fight against sexual harassment, bullying, and poverty pay.

Since then white and neoliberal feminism has often co-opted the International Women Workers’ Day, omitting the militant and industrial struggle.

United Voices of the World (UVW) were proud to speak at this year’s rally on Tuesday to remind the thousands of women present of the roots of 8 March and to highlight the ongoing struggles in workplaces; the struggles of migrant women against capitalist and racist management, corporations and state. As you can see here, women are at the heart of UVW’s fight and we salute them. We support their battles.

We believe in solidarity, not charity.

Just before 6 pm last night, we stood at Leicester Square with a sound system – the police asked the first gatherers to turn down the music. Within half an hour there were hundreds of people gathered. Placards, umbrellas, flags were raised high into the sky.

The volume only got louder.

Sex workers gathered to shout and demand recognition from everyone, including parts of the feminist movement. Sex is work. Workers everywhere demand and deserve dignity and respect. UVW is proud to have a sex workers’ sector – United Sex Workers.

From the distance there was chanting and everyone looked to the right. It grew louder and was getting closer. Past the M&M store, an incredible ensemble of women turned the corner, encompassed by placards and bearing a large banner. As they emerged the singing got louder, you could only gasp at the spectacle and the huge numbers. The banner read FALA – Feminist Assembly of Latin Americans.

It was loud, vibrant and you could not ignore this bloc – they were visible and they were vocal. Something both symbolic and crucially important. Western feminism, white feminism speaking over and above these women was not on the cards last night.

This bloc was visible – decolonise feminism the banner said and the chants demanded.

Molly, UVW member, read out the experiences of two UVW members who are currently on strike, Erica Rasheed and Mimy Longagu, both the only two female security officers at Great Ormond Street Hospital. You can listen to the speech here.

Susana, UVW executive committee, reminded the crowd of the struggle of migrant women across the world. “Our struggle will only be won by collective action, we say NO to machistas, we say no to VIOLENCIA, we say no to SEXISMO”

We then all marched through theatreland, to Soho, and back towards Leicester Square. The numbers were into their thousands and it was loud – there was music, dancing, singing, and chanting. The Latin American bloc was led by drummers and people sharing megaphones.

Spectators looked on in either awe or with intrigue, some clapped, some danced and some cheered. But what truly mattered last night, it felt, was women being together, being visible, and being loud. Taking to the streets, to celebrate the struggle, to celebrate our wins, and to demand liberation, reminding other women it is only together we will win it!

It felt good for the sisterhood. Now, we implore you – these demands have to continue to be fought for in workplaces and in the streets. It’s not a one-day fight. It doesn’t happen after work. It happens in our homes, in our workplaces, and on the streets!