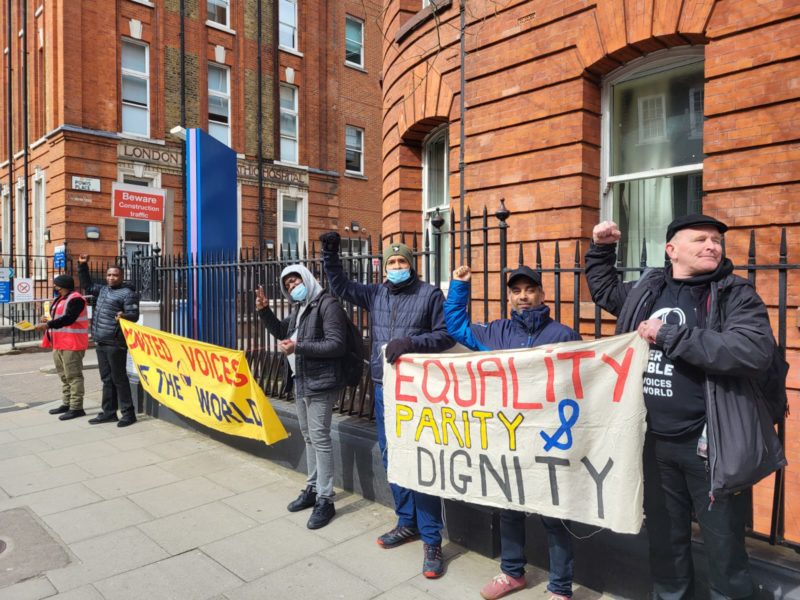 After an epic six-week strike in February and March, the heroic security guards at Great Ormond Street Hospital (GOSH) are continuing their fight against racist outsourcing by striking on every Friday in April. The predominantly Black, brown and migrant security guards are the only workers at the well-known hospital who do not receive full NHS sick-pay.

On Friday 29 April the guards and their union, United Voices of the Word (UVW), will be holding a large strike rally outside the hospital. By this point, the workers will have taken over 50 days of strike action as part of their fight for justice and equality.

The hospital’s wealthy trustees continue to ignore the security guards’ demands. Since they began to demand the same terms and conditions as other NHS workers, the GOSH security guards have been forced into strike action, then subjected to union-busting, vile racist slurs and even an injunction banning dancing near the hospital.

Despite everything which has been thrown at them, these pandemic heroes remain defiant and committed to their struggle. They are touring the country, speaking at every picket, union meeting, Labour party branch, NHS rally; they are talking to MPs, union leaders, NHS activists. They won’t be stopped and will keep fighting.

This Sunday (10 April) several of the GOSH security guards will address a meeting in Liverpool, hosted by Liverpool TUC and Merseyside BLM Alliance. The meeting will take place at The Caledonia pub from 5 till 7pm and UVW members from across the region are invited to attend to express their solidarity with these brave workers.

Speaking from the picket line last Friday, striking GOSH security guard Erica, said: “The injunction restricts our pickets to six outside the hospital. GOSH trustees hope to deny us our rights to equality and to speak the truth. But we will not be silenced. We are strong. We are determined.”

Come and join the GOSH security guards’ strike rally in Queen Square from 12:00pm on Friday 29 April to support and celebrate 50 days of strike action by these heroic and defiant workers in their fight for equality.