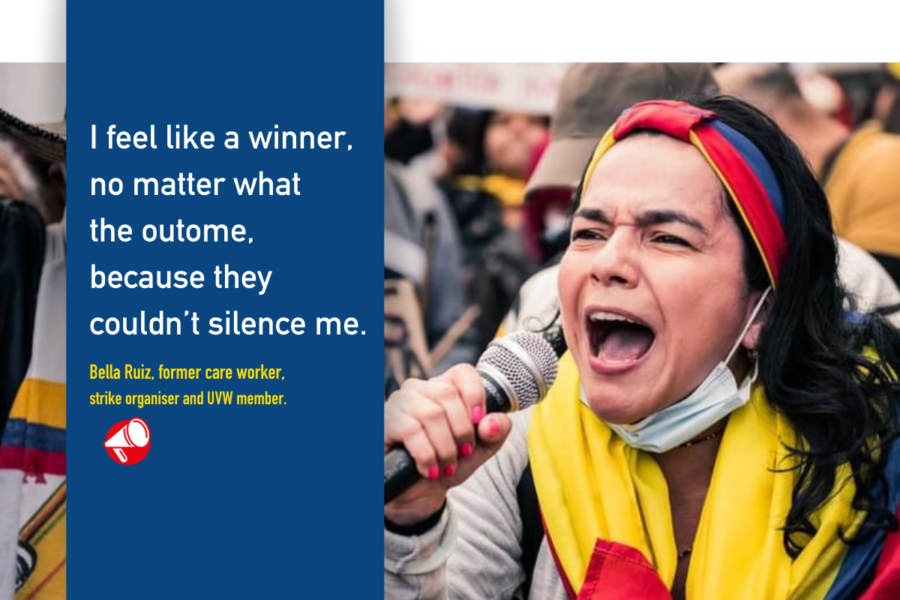 “I feel like a winner, no matter what the outcome, because they couldn’t silence me.”

Bella Ruiz, a care worker from Colombia and United Voices of the World (UVW) member who helped organise a successful strike at Sage Nursing Home in north London for better pay and working conditions – is heading to court today for the final hearing of her union victimisation claim against her former employer. She could have buckled under the pressure but she went on fighting for her dignity, and after two years, she is finally having her day in court.

An Employment Tribunal will decide whether Sage Nursing Home victimised and harassed Bella for her union activities and her fight for decent treatment, working conditions and pay. If the Tribunal finds that it did, it could award Bella compensation for injury to feelings, injury to health and even financial loss caused by her eventual, strained resignation.

Bella’s main ambition, however, is to face her bosses in court: “I feel like a winner regardless of the outcome. Because the outcome in terms of winning or losing is a matter only for the court, but what I feel is not going to be taken away from me. I have already shown that I would not remain silent and that it was their turn to look for a lawyer. I didn’t keep quiet. Showing the world the way Sage treats people is a win for me.”

Between the 9th and 12th of May, the Watford Tribunal will hear her account of how she felt victimised for challenging her bosses on poverty pay, lack of protective gear (PPE) and appalling working conditions at the height of the pandemic, and how she then felt that she was subjected to a union-busting witch-hunt for mobilising her colleagues. From the moment she raised her voice, she felt that she was confronted by a culture of intimidation. “They started sending me letters, calling me into meetings and saying I was putting the lives of the residents at risk. The environment was hostile,” she recalls.

Bella helped to unionise over 30 workers in her workplace, she led a petition for trade union recognition, hosted numerous union meetings and represented her colleagues at speaking events. After they balloted for strike action, under the campaign slogan “Quality care, deserves quality pay”, 75,000 people signed an e-petition; messages of solidarity flooded in from all over the world, the campaign yielded early-day motions in Parliament and won wide coverage in national media. By the end of 2021 care workers, domestic and maintenance staff at Sage won a huge victory and pay rise after a protracted dispute and strike.

But Bella couldn’t enjoy this massive win. By 2020, she had brought a case against her employer for victimising her and breaching her rights. She went on to file a complaint against a colleague for harassment. She recalls how her working environment went from bad to worse. She says bosses at Sage intimidated her colleagues and turned them against her. She remembers with pain being called ‘subversive’ and ‘malicious’, which had a huge impact on her mental health.  Eventually, she felt the pressure was so great she had no choice but to resign.

“I started to suffer from severe headaches, hair loss, anxiety and panic attacks.  I was on medical leave several times. It affected me but also my family, because they saw me crying a lot, and I was losing my hair, my husband had to pick it from all over the floor of our house. I still feel unwell when I remember the ordeal. I couldn’t cope with the pressure, so I decided to resign,’ she says.

Bella says she has learnt that no matter how difficult the task, with the support of one’s union, one can find the strength to face the uphill struggle: “Taking my employer to court was quite a feat, quite a challenge, because people fight, they cry, they get angry and, in the end, they leave and resign. But I showed them that it is possible, that we can speak out, that we have to be orderly in organising when things happen to us in our jobs, and that we are not alone. I have never felt alone.  UVW has never left me alone, it has always been there, it has given me many tools to defend myself.  I feel very empowered by and very grateful to UVW because for what I pay monthly – which is no more than the cost of coffee and a sandwich- I feel that it has my back. It is a gift to me and I value it very much.”

Simon Bennett is Bella’s legal representative at UVW. He says that. ‘Bella worked tirelessly to ensure that the residents of Sage Nursing Home were well looked after during the pandemic and put herself at risk to do so (even improvising her own PPE). We will argue that when she complained that a colleague had discriminated against her, harassed her, and treated her unfavourably because of her trade union activities, she did not receive the same support from Sage Nursing Home in return. We hope that the Tribunal will agree with our contention and that it will award her compensation for the hurt and distress that this caused her.’

No matter the Tribunal’s verdict, Bella’s story is an inspiration to all of us to follow in her footsteps, join a union, organise and fight for what is right.  ‘I have learned so much in this process – she says – I feel empowered, liberated, and transformed. Before I was full of anger but now I look at things from a calm and loving point of view. I have learnt that many will turn their backs on you – in Sage my own colleagues did, and that was very hard – but it is part of the learning process. The betrayal of your friends is terrible, the ones you were fighting with. But I feel at peace. It’s part of the journey and it has made me stronger.‘