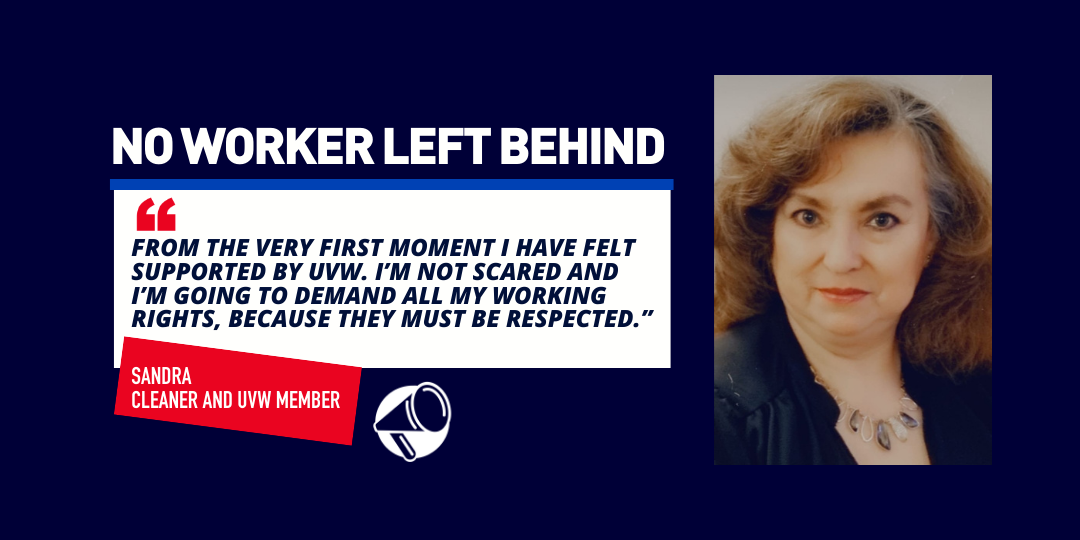 No worker left behind: a lone worker and her union fight back!

“From the very first moment I have felt supported by UVW. I’m not scared and I’m going to demand all my working rights, because they must be respected. Why should they be able to take away your work in an instant?”

This is the story about a one-woman struggle to get paid what she deserves. The story of a lone, outsourced worker who is taking on her employer and of a small union standing by her side. Together, they forced a giant facilities company to raise her salary to the Living Wage, but the employer hit back taking away some of her work. Now they are fighting to get it restored.

Sandra was a lone, minimum wage cleaner who declared a dispute with outsourcing giant Mitie and with the help of her union, forced her employer to give her the Living Wage.

As with the vast majority of outsourced workers in the cleaning sector, she was employed on Minimum Wage and had no full pay sick pay. She worked six days a week, including Sundays, to make ends meet. She hails from Ecuador where she was born and studied Accountancy and Administration. She’s been in the UK for five years.

Sandra joined UVW after she noticed there were irregularities with her pay throughout 2021; she suspected she wasn’t being paid for the hours she had worked. “I’ve always worked the same 144 hours every month, but some months I was being paid far less than others. One month I’d get £1,500 and the next £900. I thought this wasn’t right.”

She didn’t have colleagues to check with so she he contacted UVW, which submitted a claim for unpaid wages on her behalf, eventually forcing Mitie to correct the mistake and increase Sandra’s pay from the Minimum Wage to the Living Wage.

It was a bittersweet victory because just a month later, after Sandra and UVW won the Living Wage for her, Mitie took away her Sunday shift, citing ‘operational reasons’. This was a blow to her as she had always received double pay on Sunday. Sandra’s biggest income was taken away from her, and from one day to the next she couldn’t make ends meet.

UVW submitted a letter of dispute to Mitie demanding that her Sunday shift be reinstated immediately.

Angélica Hoyos is Sandra’s trade union representative at UVW. Together they are fighting for Sandra’s rights to be respected.

“This is typical of the business model of these huge outsourcing companies,” Angélica says. “It’s a model that relies on squeezing every last drop of profit from precarious isolated workers, by forcing people to work in the worst conditions possible. No sick pay, no holidays, no consideration for health and safety. But when workers fight back, they are exposed to tactics that seem aimed at intimidating them such as taking away their hours. But Sandra is no longer alone.”

Sandra says she is not afraid and she is ready to fight because UVW has her back. “From the very first moment I have felt supported by UVW. I’m not scared and I’m going to demand all my working rights, because they must be respected. Why should they be able to take away your work in an instant?”

There are many Sandra’s out there, with no one to talk to at work, nobody to unite with and fight for their rights. Out of all cleaning firms in the UK, 90% employ fewer than 10 workers.

“It doesn’t matter if you have 100 colleagues, two colleagues, one colleague or no colleagues. Or 1,000 colleagues! You will still get our full support” says UVW’s general secretary Petros Elia.“This is what UVW does; give full backing and support to small groups of workers who are otherwise ignored or excluded or prevented from fighting because they wouldn’t get the support they need to fight for their rights.”

Now the fight continues to get Sandra’s Sunday double pay back.

Sandra worked by herself but she wasn’t alone. Like her, every one of us can find help, strength and solidarity in the union to fight back and win.