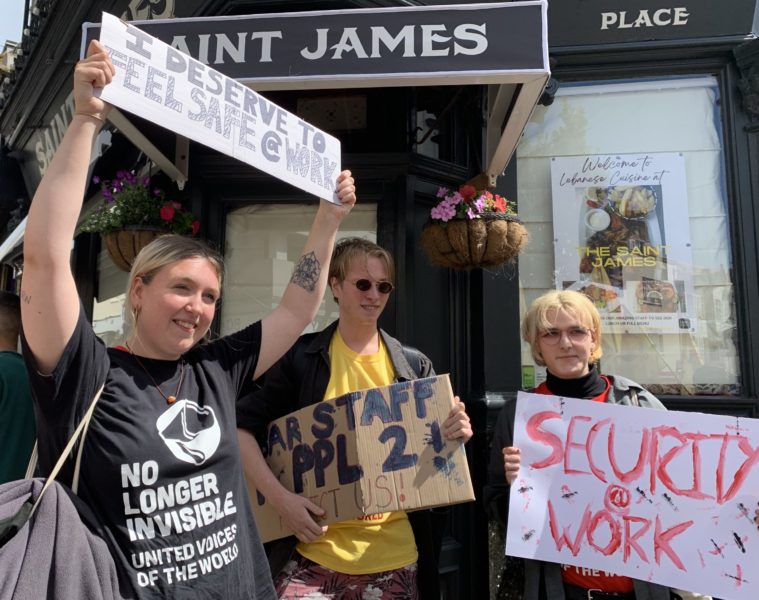 The conduct of the landlords in the dispute at the Saint James Tavern (SJT) in Brighton has shown exactly why the workers’ needed to organise and fight back. The workers have been subjected to vicious union-busting, physical assaults, and illegal sackings. The emphatic support for the workers from former SJT employees, many of whom have left because they no longer feel comfortable working at the pub in the centre of Brighton, speaks volumes. One former SJT worker has described the pub as a “living hell for the patrons and staff”.

This was a community pub, part of the fabric of the community, which bar staff enjoyed working in until Zakaria Abedi and Victoria Bennett became landlords and began what some of the workers have called a ‘reign of terror.’

UVW is continuing to urge Stonegate Group, the UK’s largest pub company that leases the SJT, to intervene in the dispute. The landlords have been reported to local licensing authorities.

Last week, Abedi shockingly told the local MP Lloyd Russell-Moyle that he would be sacking all the workers taking part in union activity while expressing a great deal of hostility to employees involved in the union. These revelations came in a phone call between the MP and the landlord, in which Russell-Moyle was encouraging Abedi to come to the negotiating table and sit down with United Voices of the World (UVW), the striking SJT’s workers’ union.

Russell-Moyle says: “These landlords are out of control, all I ask is for them to listen to their employees, a simple request.” Russell-Moyle’s call with Abedi was the day after strike leader Jake Marvin was sacked by the SJT. UVW is seeking interim relief and contesting this sacking.

Marvin said: “Following a farcical and unlawful disciplinary process, I’ve been dismissed from my post. These disciplinary proceedings are another example of the trade union victimisation, my colleagues and I have been subjected to after raising concerns and voting yes to strike action on a lawful ballot. I’ll be fighting the decision with the support of UVW.”

UVW has held two pickets outside the pub on Saturday, 25 June and Saturday, 2 July.

The UVW member and SJT worker, speaking anonymously as they felt “scared of what they can use against me”, said: “Twenty minutes before my shift, I received a message letting me know I was not needed due to a downturn in business. I think this is a false claim as there are usually two people on shift in the days and there are two people working there today. One of them was meant to be me as I was scheduled on.”

The day began with UVW’s first strike outside London and the union bringing its loud and joyous pickets to the seaside. The usually busy Saint James Tavern was closed with workers and UVW members at the Stonegate-leased pub walking out over pay and conditions.

Over 100 supporters turned up outside the pub, which had decided to close ahead of the strike, for a rally, including a coach-load of UVW members from London. Supporters joined the picket in large groups, including a large contingent who had visited the RMT picket for the rail strike.

The atmosphere on the picket line was happy and joyous, in stark contrast to the atmosphere in the workplace, which has seen weeks of vicious union busting. Workers have endured infringements of their employment, contract and human rights. In response, the workers are bringing further legal action against the bosses. The previous week saw the now sacked strike leader Jake Marvin be suspended from their job without due process.

The second strike day, hundreds of supporters gathered once more outside the pub, along with indigenous Ecuadorian dance group Las Warmis who brought their beautiful dancing to the picket line. Once more the landlords shut up shop and ran away instead of facing the workers they have assaulted, victimised and discriminated against.

Petros Elia, general secretary for UVW, said: “The behaviour of SJT landlords is unlawful and criminal. Zak and Vicky have not only flouted UK employment law but they have also attempted to stamp all over our members’ human and trade union rights to freedom of assembly and association.”

Elia added: “These publicans are damaging the local community, causing scandals and hardship to members of the local community. Stonegate needs to intervene now. Our members at SJT will continue to campaign and strike to ensure they are treated with dignity and respect and are given a safe workplace. We remain available for negotiations at any time.”

Hundreds of trade unionists have emailed the pub landlords, protesting against the union-busting and what they feel is trade union victimisation.