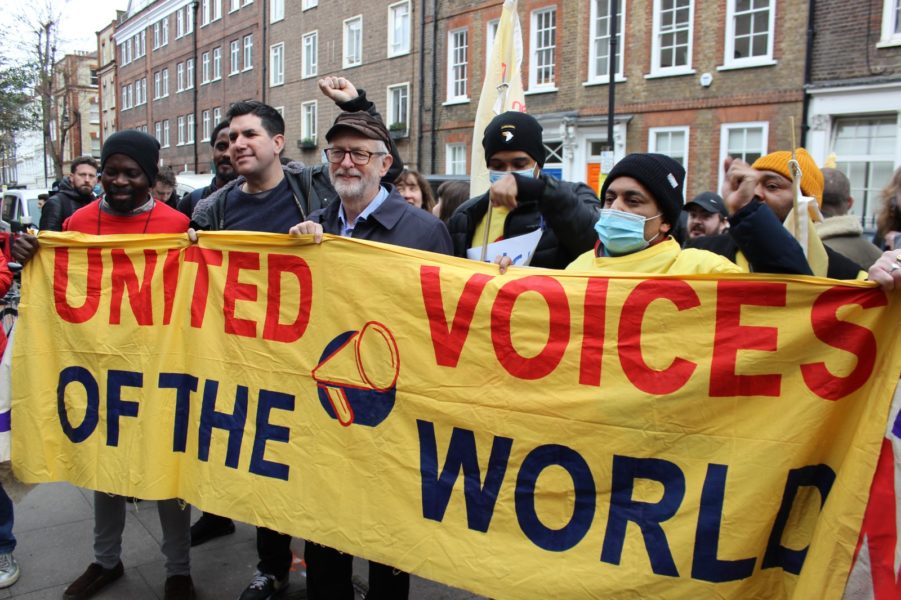 The first week of the Great Ormond Street Hospital (GOSH) security guards’ strike for equality and against race discrimination was eventful, action-packed, and well attended. On Thursday 3rd February, the strikers held a lively rally that gained national TV coverage with support from activists, trade union leaders, politicians, NHS workers, and even a choir. Friday 4th February saw a peaceful occupation of a nearby GOSH office, and an incident involving three strangers who were trying to intimidate the strikers and their supporters.

On Thursday, the strikers marched all together holding banners from the nearby square to the main entrance of the hospital, where they told their stories to the crowd and demanded that hospital management speak to them. Their request was met, yet again, with silence.

The only two female security guards and UVW members spoke about their poor conditions at work. Mimy Longangu explained how having been the first and only woman security guard at GOSH for six years, she found herself without work when she had her child: “I lost my job because there was no flexibility for me.”

Erica Rasheed said she was not going to give up. Erica is pregnant with her second child and told GOSH “I’ll be here demanding my rights even if I’m seven months pregnant! We must stand!”

Their colleague Samuel Awittor told the crowd that with everyone’s help” history is going to be made”. “We are the real people. We love GOSH and this is why we want the right thing to be done!”

Former Labour leader and MP Jeremy Corbyn, Labour MP Richard Burgon, as well as national executive members from the National Union of Rail, Maritime and Transport Workers (RMT) and University College Union (UCU), spoke in support of the security guard’s fight for the same terms and conditions as their NHS colleagues. The guards are the only workers at the hospital to not have full sick pay in the midst of a global pandemic.

Day two of the action on Friday began with a peaceful and friendly occupation of the nearby GOSH offices with activists dancing to the Macarena as managers held back smiles. After several hours of occupation, the picket moved outside where men attempted to intimidate them by yelling and trying to grab their megaphones. Despite a young woman UVW member being physically assaulted and sustaining a few bruises and a sprain, the strikers remain resolute and vow to keep going. The incident was reported to the police.

The security guards will hold a Friday rally outside the hospital every Friday at midday for the duration of the strike.

Come and support them if you can!