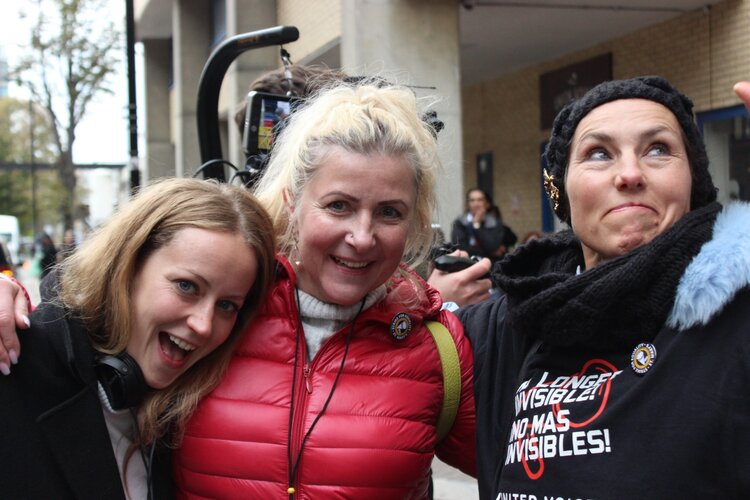 “Well if they can do it, I can do it”: An interview with Filmmaker Hazel Falck

IN FOCUS: Hazel Falck is the director of the ground breaking Guardian documentary covering the St. Mary’s campaign that saw UVW members go on longest strikes in the NHS’ history. Read about her journey with us and what it felt like to capture people organising themselves and winning.

You can watch United Voices here:

Q. How did you find out about United Voices of the World (UVW)?

Hazel: “I had just finished making a film and had about a month’s worth of money to live on, and I came across a special issue of Red Pepper dedicated to ‘new unionism’.

I had a fellowship at Queen Mary [University of London] where I was allowed to use the camera equipment for free, and I just thought, “I should use this window of time to make something before I need to go back to looking for work”.

The various union stories in the edition felt so progressive during such a grim time at the beginning of 2019, with constant wall to wall Brexit coverage and not a lot to get behind or put your faith in. The way Shiri [a UVW organiser] wrote about UVW was fascinating, and I have always been interested in unions, but I hadn’t made any contact with these new models of unionism. I’m politically-minded, but am just an ordinary person in terms of political involvement, and the idea of power of the majority set off sparks in my mind.

I remember I went for a run, and at one point just stopped in the middle of the park, and I realised I needed to make a film about that union with the camera I had.

I wrote to the generic UVW email account, but no one replied! Some time later I was doing odd jobs and trying to figure out what came next. I kept sending messages and finally someone replied and told me to call. I spoke to Molly and Petros [UVW staffers] on the phone and everyone was excited.

They suggested I apply for a grant with the Joseph Rowntree Foundation, I thought the deadline had passed, but it turned out it had been extended by a couple weeks and the deadline was that day! So, I went and looked it up that morning and decided, “ok, let’s do this”. “

Q. What did you originally want the documentary  to be  about?

Hazel: “Originally, I thought Susana [a UVW staffer and organiser] would be the gatekeeper to all the stories the film follows. We made the teaser with her for the funding pitch, and she gave an amazing interview, and was integral to getting the funding for the film.

When I started scoping there was so much going on – the Chanel and Haringey campaigns, and I’ll naturally try to do 100 things at the same time, and it was similar for Petros and Molly in terms of wanting to include a lot in the film, and it was hard to see how to narrow it down.  A couple times we started following a story, but by the time we would get approval from the Guardian execs, the campaign would already be done!

Documentary is really a case of working with real life, it doesn’t wait for you or change for you,  you just have to follow it and ride it out and wait until it takes shape.

St. Mary’s was always a promising case, and I’d heard about Loreta before I met her, through Isabel [a UVW staffer].  We also followed Fatima, a cleaner at the Ministry of Justice, and the University of Greenwich campaign, but St. Mary’s wound up being the one where we could tell a whole story from beginning to end.

We filmed many other interviews with such interesting people from the union, and originally I really wanted to make a tapestry film of all the experiences and angles of being part of the union. At the last stage of the edit we wound up having the most coverage of St. Mary’s then any of the other stories.

We had the journey from beginning to end, and in the end that became the sole focus of the film. The story turned out to be even more significant now than at the time, because of the hospital setting, and the outsourcing situation within the NHS which foreshadowed what we have seen revealed during the pandemic.

Throughout the whole process I met such amazing people, and I am hoping we can also keep working with the material we filmed and tell some of those other stories in full.”

Q. How  did  you feel  making the film? How did it feel being  a part of  the union?

Hazel: “It was quite a journey and at times I felt incredibly moved, like at the beginning of the AGM. In some ways the AGM moved me more than when we were on picket lines; because the AGM was a vision of a relatively democratic system where people had the space and the voice to speak about their successes and to get support, to have food, and to talk with each other.

All the meetings  were beautiful to me, and the solidarity and dynamics in the groups. But then you come across other things which are very different to what you thought they would be.

The identity of UVW is so positive, it’s all about ambition and I think that is how UVW gets somewhere, it sets an objective and it works towards it. There are a core group of people spearheading it, and the engagement and involvement of the membership is being worked out along the way.

I had a lot to learn about what it really takes to take a group of people out on strike and what it takes to sustain them. Some parts are uncomfortable, and conflicting, and it takes a lot to get people over that kind of chasm between the start of a strike action and the end result. And then as a filmmaker you’re also trying to learn something at the same time as you are trying to cover it, you’re trying to bring it all together – your preconception of it, the reality, and the angle you want to cover.

Basically, you’re trying to define the story, or hone in on the story, while you’re learning what the story actually is. Halfway through I realised there was a completely different film that I should probably be making about democracy and organising, but it wasn’t the one I was making! And if I made that, I’d probably have realised there was a whole other film to be made about something else halfway through that too. It’s just the way it goes, you keep learning the whole way through.

What remains is a genuine story – the story of the group of St. Mary’s workers – and they went on an incredible journey.

I think one of the first experiences I had when I met the union was them inviting me to a strategy meeting. A quarterly meeting at SOAS and I somehow wound up being the scribe, I was taking notes for the meeting and they were discussing how they were going to make the long-term transition from a founder-led to a member-led organisation. And Vera, one of the UVW co-founders, had a really clear vision and opinion around that, and that stayed in my mind as the intention and future direction of the union.

I already had an idea of how complex it is to try and build something the way that UVW is trying to build it. But the experience of documenting the union has definitely increased that appreciation. I think it’s exciting to look towards the process of how UVW  transitions into being increasingly member-led, how it can become a truly replicable model. Then other people can follow that model, doing it themselves.

Q. Why  do  you think it is important  to document union struggles on film?

The intention was to make a ‘follow in the footsteps’ kind of film through a union and strike action experience. So that someone who might never have joined a union before or who was considering strike action, could see someone like themselves in the film and envisage that journey for themselves.

I also had my own questions, about what organising means and whether it works, or whether it could work, and if so, how does it work? I just thought if I can capture people doing it themselves, really organising themselves, then other people watching would think, “well if they can do it, I can do it”.

I think that is what we wound up showing in the film. You just couldn’t have asked for better role models than the St. Mary’s workers or for a better result.

And now that it exists, now that the victory is set in amber, it can be used to get people going, to ignite something in them, to show them that something is possible.

It can often feel like there aren’t many answers at the moment. And that is what is so powerful about the UVW and its vision for trade unionism. It does things that work, it takes actions, and these then get converted into real improvements in people’s lives, and that is so powerful.”

If you want to get organised and win, join UVW now.