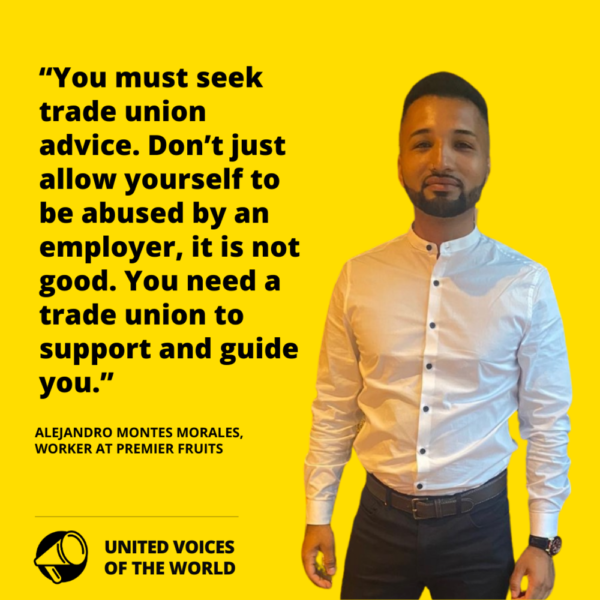 There’s power in the union: a single father’s fightback story

This week as millions of children walk back into school and parents all over the UK prepare for challenges that come next, one single parent is preparing to take his employers to court.

Alejandro was born in Colombia, but lived most of his life in Spain. In 2016, financial hardship and a wish to be close to his son meant that he made the difficult decision to move to the UK.

When he first arrived in London he worked as a cleaner. He worked long hours for little pay, and struggled to learn English because he only worked with other Latin Americans. He noted that he met an amazing manager during his two years as a cleaner, who said to him, “you need to be a member of a trade union. You are going to find a lot of abusive employers and you need to protect yourself”. Alejandro wasn’t entirely convinced, but he joined UVW anyways.

In 2018, Alejandro started working at Premier Fruits, UK’s largest independent wholesaler of fruits and vegetables. He described the income as life changing. He couldn’t believe he was earning 30k a year, as a cleaner he had never come close to that salary. He felt proud of himself, but also explains how, “I spoke very little English and I noticed I was always the one working. They knew I was grateful; I was the perfect employee. I was loyal, I’d bend over backwards for them and they’d say ‘one hour more, one hour more’”.

Just before Covid-19, Alejandro’s co-workers were getting restless with Premier Fruit’s conditions. They worked 9-hour shifts, 6 days a week and then 9-hour shifts, 5 days a week. Alejandro worked night shifts so he could see his son, but sometimes slept 4 hours a night for weeks.

When lockdown hit, Premier Fruits didn’t take advantage of furlough. Instead, they stopped all bonuses and asked all employees to take a week off a month, unpaid. For Alejandro, this meant a 25% reduction in wages and one week unpaid. His income plummeted to £700 a month. As a single father, he couldn’t afford to provide for his son.

He thought about calling the union to cancel his membership, he couldn’t afford the £10 a month. But then his colleague said to him, “I’ve spoken to my union, you should too.”

Alejandro raised a grievance and the company subjected him to all kinds of victimization. You can read more about the boss’ union busting tactics here.

Alejandro reminisces on how, “when I was dismissed, I was on my break at 5am. I was called in for a meeting, they handed me a letter and dismissed me on the spot. No formalities, no trade union representation, nothing.”

Luckily, he moved quickly. UVW’s caseworkers Celina and Cormac worked with Alejandro to pull together documents that usually take months to finish, filing for interim relief just days after his dismissal. Alejandro won the case and will be paid while he waits for his employment tribunal hearing.

Alejandro’s advice, much like the advice he was given when he first arrived in the UK, is that, “you must seek trade union advice. You need the help. Don’t just allow yourself to be abused by an employer, it is not good. You need a trade union to support and guide you.”

Celina, UVW caseworker, adds that, “Alejandro’s case resonated with me so much. Being a parent myself, I understand the difficulties of not being able to provide for your child. Alejandro was also very concerned about a lack of PPE. I knew I had to act very quickly in order to resolve Alejandro’s case.”

Share Alejandro’s story so that others know what a difference a union can make. If you are having problems at work or want to protect yourself, join UVW today.