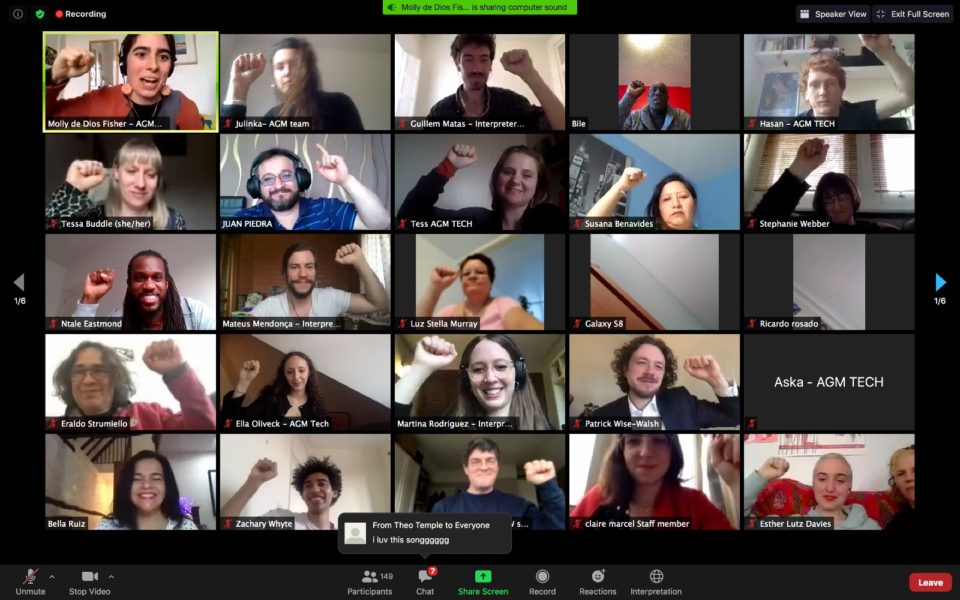 Hundreds of UVW members from all workplaces and sectors representing cleaners, security guards, sex workers, architects, lawyers, care workers, charity workers and more came together on 27th March at the UVW annual general meeting to decide how their union should fight forward.

Petros Elia, UVW co-founder welcomed members new and old with the story of the union’s humble beginnings in 2014, in the Latin American community, and how solidarity, direct actions, determination and creativity built the fearless, resourceful and fightback union that UVW is today.

He said “we started from scratch, and for almost 4 years we had nothing, no staff, no resources. But we recognised that we can do something about the terrible conditions workers in London face and that we don’t need millions of pounds to win dignity, respect and equality at work”.

He ended his opening address with a call to action “Dream big and keep on fighting and winning!”

The AGM, in true UVW tradition, was a member-led affair with Zachary White, from the UVW’s legal sector (LSWU) presenting the union’s finances and membership demographic and staffing. UVW is proud to be a majority migrant and woman workers’ union; ⅔ of members are non-native English speakers, 60% are women, and members come from over 100 nations.

Aska Welford, from UVW’s architectural workers’ sector  (SAW) introducing the motions’ debate, explained that since 2018 UVW has conducted a mass consultation through workshops, surveys and meeting with members to reflect upon the growth of UVW and define future priorities and direction.

Patrick Wise-Wels (LSWU) and Elio Beale from United Sex Workers (USW) guided members through the motions process and proposers, supporters and opposers lined up to speak on each proposal. UVW members passed the following motions: Motion 1: Viva UVW, Motion 2: Fighting Forward, Motion 3: Your union, your voice, your UVW and Motion 9: UVW groups structure. All the other motions that were not able to be discussed will be referred to the Executive Committee.

Bella Ruiz and Juan Pablo Piedra from the newly formed Voces Hispanas sector introduced inspiring UVW leaders from workplaces across the union, who lined up to share and celebrate their wins and their struggles.

A truly democratic, inspiring and participatory workers’ assembly, the AGM closed with the words of Sage Nursing home care worker and strike leader Bile Azhouan who said “The 27th march will be remembered by all of us. Despite our problems and our struggles we are united and we are here together. Stay united and stay together. We exist. We exist to make change. The more we fight, the more we build bonds. We are now a family. “

Find out more about the AGM here.