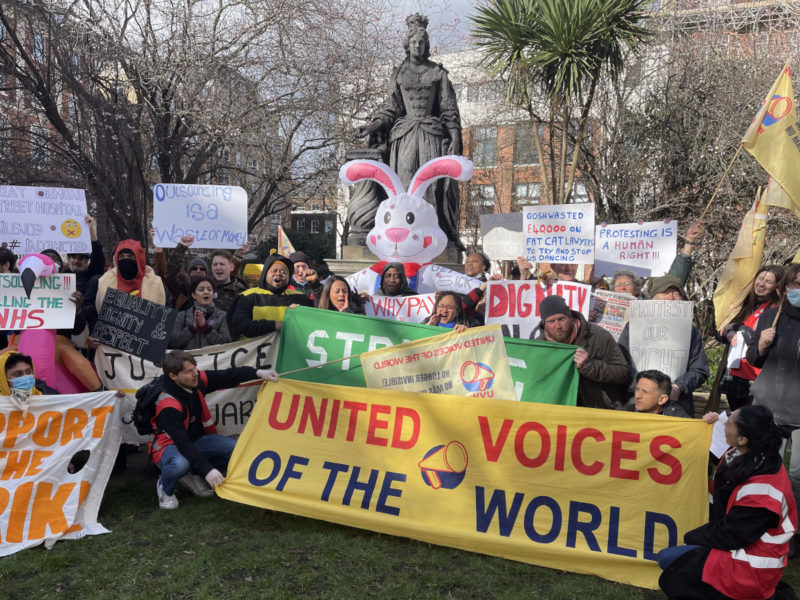 Security guards at Great Ormond Street Hospital (GOSH) held their first picket since a series of rallies was interrupted by a High Court injunction and then an extratropical cyclone.

Security guards at the hospital are more than half way through a six-week strike against racist outsourcing. The outsourcing arrangement puts the security guards, who are predominantly Black, brown and migrant, on poorer terms and conditions than other NHS workers. The dispute has seen them be ignored by the hospital and subjected to a High Court injunction restricting their right to protest, union-busting tactics and even racial slurs.

Last Friday saw the striking guards and their supporters gather in Queen Square, near the hospital. This was the first rally since a High Court battle which saw United Voices of the World (UVW) get hit by a temporary injunction, before negotiations between the union and the hospital agreed to some restrictions on protests in the immediate vicinity of GOSH.

Striking GOSH security guard Erica, told the rally: “We are fighting to have the same terms and conditions, the same benefits, the same rights, as the other staff that work with us. We were here for so many days, with the rain, with the cold, and they still ignored us. Even after everything we did to try to reach them, they still ignored us. They prefer to spend money to go to the High Court to stop us instead of negotiating with us. This made me so sad, so angry.”

On the day, the boss of the hospital’s security guards was seen standing on the opposite side of the road from the rally, seemingly hoping to identify breaches of the agreement so the excessive police presence could be justified. Erica added: “You can see our own manager. They’re looking at us, against us. He should be here with us, but he’s there. Our own manager is looking at us prepared to reach the police to arrest us if it’s necessary. Can you imagine something like that?”

Defying the hospital’s attempts to silence the striking security guards and their supporters, a group of around 60 gathered for a peaceful and joyous rally which heard speeches from the guards themselves and a number of figures from across the trade union movement.

Striking security guard Samuel gave an impassioned speech, saying: “Outsourcing is killing people slowly, destroying dreams, it’s killing people’s destiny. We see it as an epidemic, if we don’t fight it now, it will become a pandemic, which we cannot fight anymore. The time to fight outsourcing out of public institutions, especially the NHS, is today not tomorrow. I’m calling on everyone, especially the union movement, to come together as a collective effort against the storm of outsourcing, the storm has destroyed enough!”

Kevin Courtney, joint general secretary of the National Education Union, told the rally: “I tell you, when you start to hear the stories that these working people are saying, you start to feel sick that an NHS Trust could be behaving in this way. They are the only working people at [GOSH] who don’t have access to full sick pay, despite the fact that you will know if you’ve been following the news, security guards are at more risk of Covid than many other occupations.”

Sandy Nicoll from near-by university SOAS and who sits on the UNISON national executive committee, addressed the crowd, saying: “We should be doing everything we can inside the [trade union] movement to ensure that the two tier workforces are got rid of inside our workplaces, that we end the scourge of privatisation and outsourcing and show these workers the dignity and respect that they deserve.” Nicoll thanked the striking GOSH security guards, who have been visiting university picket lines across London, for joining the SOAS picket line earlier in the week, adding: “Keep getting your message out there, carry on going out to the picket lines next week. There’s another three days of university strike action.”

Psychotherapist Alia Butt addressed the rally on behalf of NHS staff voices, an anti-privatisation group made up of NHS workers. Butt said: “We support all striking NHS workers, especially the striking workers at GOSH. We believe all workers should be treated with respect and dignity. The security staff at GOSH have inspired many of us to fight for our rights, even in light of the attempt to make this as difficult as possible for them. We really salute you.”

Hannah Caller, a health worker from Fight Racism Fight Imperialism, said: “All people working in the NHS should have NHS pay and conditions. There is no way people should be discriminated against. We know that the racism inherent in the fact that the majority of security guards and domestics and the majority of the people who are tendered out to the NHS, are people of colour or working class people. People who are already struggling. There are people who cannot feed their children, yet they work day in day out as frontline staff in a pandemic in the NHS.”

The crowd was also addressed by UVW general secretary Petros Elia and Paul Cox, south east regional organiser for the Rail, Maritime and Transport workers’ union (RMT) who represent workers on the London overground who have been taking strike action this week to resist cuts.

After the speeches had finished, the striking guards and supporters marched to the front of the hospital singing ‘Solidarity Forever’. The union has had to agree not to play amplified music in the vicinity of the hospital, but nothing could silence our collective voices. Once opposite the main entrance to GOSH, the crowd sang “We shall not be moved”, while holding placards and banners demanding an end to racist outsourcing and for the workers to be treated with dignity.

During the protest, the guards were joined by some of the GOSH cleaners, who were recently in-housed by the hospital following a successful campaign by UVW. Patients at GOSH and their families also stopped to express their support for the security guards and their fight.

After ensuring our voices had been heard by the GOSH trustees, the crowd marched around the main hospital buildings to another hospital location, where strikers and supporters danced while listening to music, in true UVW-style.

During the rally, striking security guard Erica said: “I want to thank every one of you that is here. I’m six months pregnant  and until I’m eight, nine, whatever I will be here because I’m fighting not only for me, not only for us, but for my daughter. Thank you and please continue to support us and continue to come here and join our fight because we need the support.”

Join the strike rally on Friday >>

Come to the benefit party on Saturday >>

Find more about the workers and their stories >>

Donate to their strike fund >>

Donate to their legal fund >>

Send a message to GOSH >>