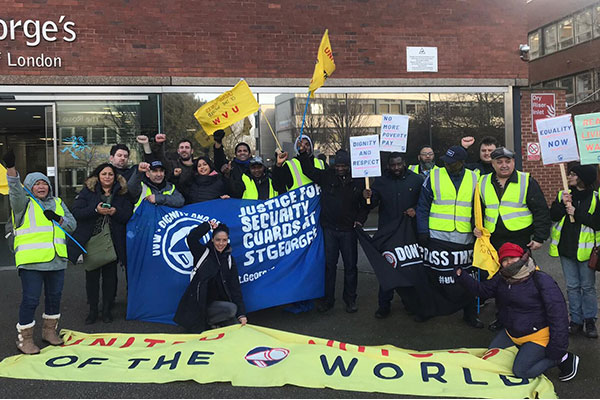 A group UVW members are taking St George’s, University of London (SGUL) to an Employment Tribunal, seeking to end an outsourcing arrangement, which the union believes is racist. These workers are a group of Black and brown outsourced security guards who are bringing claims of indirect race discrimination on the basis that they are employed on inferior terms and conditions to their majority-white in-house colleagues.

Compared to SGUL staff, the outsourced security guards only get three weeks sick pay rather than six months, two weeks less annual leave, three per cent instead of 16 per cent pension contribution, and no extra pay for working unsociable hours. They argue that St George’s controls and maintains this two-tier system of pay and conditions. They want to be brought in-house on the same terms and conditions as the rest of the mostly white staff.

A large group of cleaners and security guards at Great Ormond Street Hospital have also launched similar Tribunal claims. The GOSH security guards are currently on a six-week strike against racist outsourcing.

These unprecedented UVW legal challenges and victories against the scourge of outsourcing are chipping away at the unfair two-tier system of racist employment. There are over three million outsourced workers in the UK who could potentially benefit from these legal precedents.

“All we want is to be treated fairly. We don’t want anything that we don’t deserve. Everybody deserves to be treated equally, with respect and this is what we are fighting for. But when you look at St George’s Hospital, it’s ethnic minorities, Black and brown workers who are disadvantaged in this situation, and this leads us to believe that this institution is racist. We feel that we have a very strong case against SGUL and this is the reason we have decided to take the case to a Tribunal. We all believe that the Tribunal will hear the evidence and see that what SGUL are doing is immoral and unlawful. UVW’s legal victory against Royal Parks, has set a precedent unmasking racist outsourcing which can’t be ignored.”

“This case has potentially huge ramifications for outsourcing across the public sector and beyond. It hopes to make legally clear what we have known for a long time: that outsourcing tends to reinforce and worsen pre-existing racial disparities and drives down working conditions. It also could have a transformative effect on indirect discrimination law, allowing Black, brown and migrant workers to claim that those employed elsewhere in the organisation are unfairly given better pay and conditions, as women in Equal Pay claims such as Enderby have been able to do for years. We believe this could be the beginning of the end of outsourcing in public institutions, having won a similar challenge in Antwi v Royal Parks, and with more cases currently underway against Great Ormond Street Hospital and the Ministry of Justice.”

UVW’s previous press releases about the fight against outsourcing at St George’s: